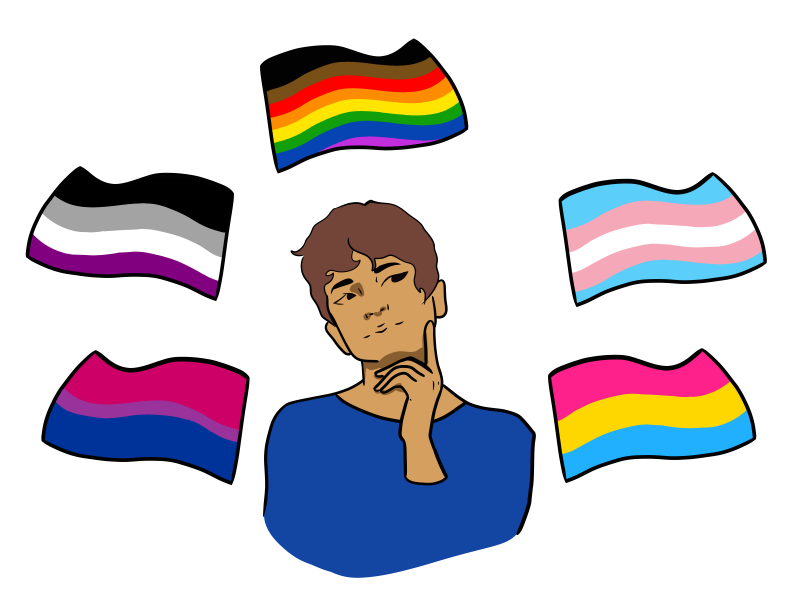 Lesbian, gay, bisexual, transgender, genderfluid, nonbinary: the terms for people who don’t identify as heterosexual can get confusing.

Even if we know these terms, it’s tough to understand the experience from the outside. So what is privilege, or lack thereof, like for the LGBTQ+ community?

Genderfluid is one of many identities that fall under the trans- gender umbrella, which consists of identities that don’t align with the gender someone was assigned at birth.

People who identify with the gender they were assigned at birth (sometimes called cisgender) don’t typically have to worry about risks when it comes to their gender presentation, but transgender people have to put thought into how they want to look versus what is possible and/or safe. Drawing attention to their gender by presenting differently than usual creates a risk of being outed, or having their identities known, which could lead to discrimination.

The considerations that go into gender for transgender people can also lead to complicated feelings about identity.

“I sometimes wish to not be the person I am,” Dodo said. “Because I just want to be normal and ac- cepted. And I feel like [who I am] makes me not normal.”

For transgender people, gender presentation plays a big role in comfort as well as safety. Even be- ing able to appear more masculine or more feminine depending on one’s identity is a privilege of its own. Dodo said that they consider how others will react when they decide how to dress.

“I don’t know… if [other students] would talk behind my back and say some rude or mean stuff about it,” they said. “It would be easier [to vary gender presentation], but I feel more protected always presenting as feminine.”

Safety is a significant concern for many LGBTQ+ people. An invalidating environment can feel dangerous or at least very uncomfortable.

One freshman who spoke to the Lodge anonymously because they are not fully out to their family, explained that they hear “slur usage, at [them] or behind [their] back” at school that they usually don’t speak up about.

“I don’t want to get labeled as like, ‘Oh, these crazy queer people. They’re always so angry all the time,’” they said. “But… there’s some things that have been said to me that are just really, really hurtful.”

“I take nothing seriously, except when it comes down to race, sexuality, that type of stuff. And people just joke around with it too much,” he said.

He said he feels that people who belong to racial or sexual majorities say careless things because it isn’t personal for them.

“Their identity doesn’t match with it, so they don’t have reason to feel anything about it,” he said.

The LGBTQ+ community is an intersectional one, counting many races, religions, and socioeconomic statuses among its members. Different identities face different struggles.

Because it’s not only sexuality that gives some people privilege and others not. Even in the LGBTQ+ community, things
are harder for people of color. According to the Trevor Project’s 2021 National Survey, LGBTQ+ people of color report higher rates of suicide risk than white people, especially Black transgender youth with 59% seriously considering suicide and 26% attempting it.

Youth who identify under the transgender umbrella are more likely to experience depression and consider and/or attempt suicide than cisgender youth, including those who identify as LGBTQ+.

Acceptance is a privilege that can save lives— the Trevor Project’s 2020 National Survey on LGBT Youth Mental Health shows that LGBTQ+ youth who have even one space of affirmation and acceptance are 35% less likely to report a suicide attempt.

Supportive schools and peers can play a huge role in this, helping ease anxiety and depression even if someone’s family will not support them.

School is potentially a safe space for LGBTQ+ teenagers under the right conditions. The essentials are educated and open-minded teachers, rules regarding bullying and harassment that are continuously enforced and clubs that provide opportunities for LGBTQ+ students to talk openly about their experiences.The anonymous freshman said that they would like to see more of these opportunities beyond MySpace Alliance, a St. George’s club that serves as a safe space for people to discuss various social justice issues.

“I just feel like our school community needs to understand that queer people are here, we want to talk about it,” they said. “I’m seeing all these other schools who are exemplifying a lot more tolerance for queer people” by having groups like queer student unions, which focus on a specific minority demographic.

Gender privilege is a complicated topic. Privilege is something that many of us have in one way if not in others. That’s not something we can control. But learning about others’ struggles can lead to better understanding and equality.