OPINION POLICY: The Lodge opinion section is a venue for the free expression of the student views at St. George’s Independent School. The opinions represented in this section are those of the authors alone and do not necessarily reflect those of the Lodge staff or of the St. George’s community at large.

When a school follows a certain religion or set of religious ideas, it can spark backlash within its community. There is often a discussion of if it’s fair to the students who may not follow said religion or those who feel forced into it, especially when the school incorporates it into everyday life.

When reading the school’s mission statement, it states that “St. George’s Independent School is an Episcopal school dedicated to the pursuit of excellence…[through] an inclusive learning community that
nurtures outstanding academic achievement, relationships, leadership and character reinforced by Judeo-Christian values.”

Our school incorporates worship into our lives once a week through a chapel service. However, there are students who might question if that should be required to attend. 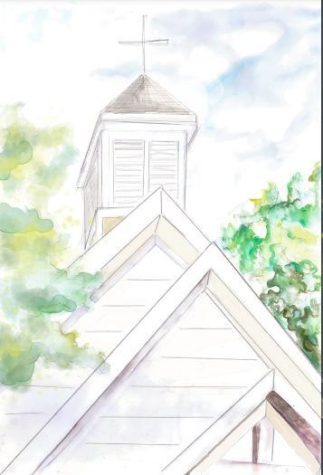 As an Episcopal private school, the school itself has a right to establish a religion within the school and to expect their students to respect that. When someone chooses to attend St. George’s, they choose to follow the guidelines that align with the school’s beliefs. Part of that means attending chapel. It’s not out of line to expect students to attend chapel once a week for 30 minutes.

Some students might see attending chapel as being disrespectful to those who don’t follow Christianity.
While that could be the case at some private schools, St. George’s makes an effort to be inclusive in the way they worship. On October 11th, a rabbi came and spoke about Judaism’s high holy days and the choir sang a Jewish hymn to honor his being there.

Chapel is valued by the St. George’s community in a lot of ways. Worship is sacred in every religious setting, and the faculty of St. George’s does its best to keep it that way. The beneficial aspects of chapel are important to understand and respect. For some people, our once a week service may be the only time they have during their week to worship.

The intentions the school has when it comes to making chapel a school wide expectation are not nefarious. It is likely that they simply want to strengthen the students’ faith and give them a break from all the chaos of school.

It’s understandable that students who don’t follow Christianity may be uncomfortable during chapel, but they and their families made an agreement to respect that guideline when they chose to be a part of our community. It has never been a secret that worship is a big part of our everyday lives on campus.

It’s a respect that goes both ways. The school itself respects that not everyone agrees with Episcopalian views, and they adapt to it as best they can. Those same people have to understand that faith is what our school is built on. It clearly says so on our website for everyone to read before they decide to attend here.

It’s fair for our school to make chapel mandatory, all things considered. When a school is founded with certain principles and values, the students and families who choose to attend it also agree to respect those principles and values. It’s not that anyone is trying to make students with other religious beliefs uncomfortable in chapel, it’s that they are upholding the faith instilled in the school and the faith students chose to respect from day one.

Practice What You Preach

If you asked a St. George’s administration member what quality of this school they are most proud of, chances are several of them would say the school’s diversity.

On several occasions, the chapel speakers have talked proudly about the school’s racial, gender and religious diversity in chapel to bring the school together. With religious diversity specifically, SGIS has stated in the “Being an Episcopal School” section of their website that they have
an“uncommon commitment to inclusion, in an atmosphere that welcomes families of any faith.”

That’s a pretty strong statement, right? You’ll see why I brought it up soon enough.

For some students, going through the prayers, standing up when told and listening to sermons might be no big deal. However, for students who are not Christian, they might feel left out, bored, annoyed or even uncomfortable.

Therefore, one might make the decision to stay behind and hide out, as they don’t want to go through chapel while not being a Christian. And this isn’t far-fetched, because you know… the school has religious diversity!

So why do students get in trouble for skipping chapel, when it might not have any religious meaning to them? To make the students feel like the school is religiously diverse, you must respect the religious beliefs in question. This is why assemblies that revolve around chapel should be optional.

One might argue that most of the school is Christian and I’m only speaking for the few, but I wouldn’t be so sure about that. St. Georges has a lot of religious diversity. I know several students who are not of the Christian faith, and others would probably say the same.

Some people might bring up that if you choose to attend a Christian school, you should understand that you must attend chapel. There are several reasons why students would go to SGIS which are not religion-based. Firstly, when you are a kid, you cannot entirely choose what school you go to. Not only that, St. Georges makes a point to be welcoming and inclusive of all faiths, not just one. A lot of kids can also benefit from going to a smaller school and having more time for one-on-ones with teachers. The students who decide to go to a religious school for any of the above reasons should not be forced to follow that religion.

I’m not saying that we shouldn’t learn about religion. Learning about other faiths can absolutely help us become more open-minded as people. That is why we are required to take a full-year religion class. However, we should not be forced to go to Chapel and worship certain religious beliefs. If we want to do so, we should do it of our own free will.