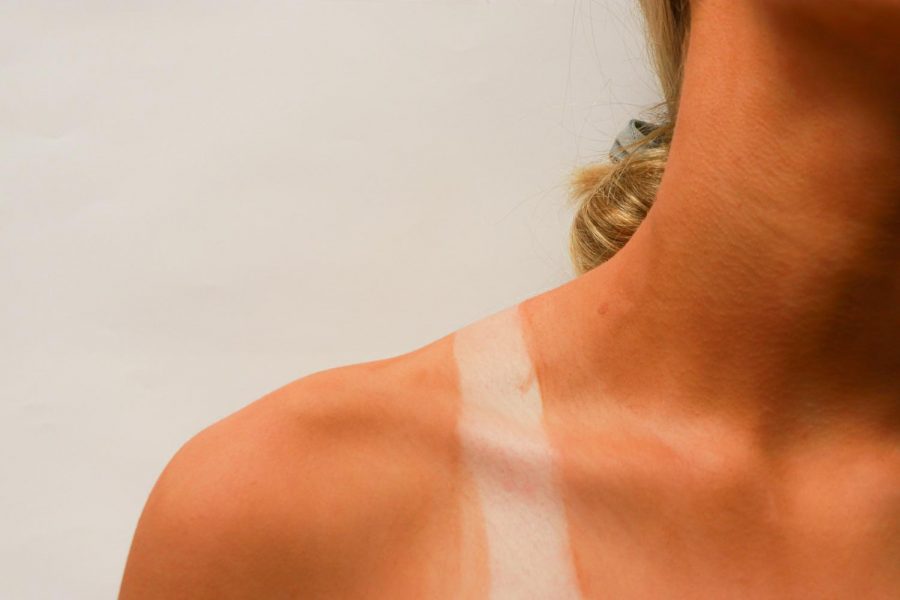 Should spray tanning be accepted? Is there a certain line that we cannot cross?

As prom season approaches, high schoolers start to consider different ways to enhance their appearances.
One of the most popular trends is spray tanning, especially among females. In 2010, 70% of people who
went to tanning salons were white females between the ages of 16 and 29, according to DoSomething.org.
The ethics of spray tanning have come into question, however. Should spray tanning be accepted? Is there a certain line that we cannot cross?
Our two opinionators weigh in with different perspectives, but find they have a lot in common.

All shades are beautiful

In the past and around the world, skin tones themselves have come in and out of fashion. In the 18th century, Europeans valued pale skin so much that they powdered their faces with white lead in order to achieve a paler face. In 20th century America, tanned skin became a symbol of a healthy, outdoor lifestyle. Skin tones have always reflected different standards of beauty from around the world, but not necessarily cultural appropriation.

The culture surrounding tanning, I believe, is not an appropriation of black culture, or any other culture for that matter; it is a celebration of the wide variation of skin tones that exist across the world. There is a beauty to people of all different colors, ethnicities, and backgrounds. Beauty is about borrowing, accepting and becoming. Beauty is a matter of what an individual’s vision of beauty is.

I believe that there should be a freedom to pursue tanning as a beauty device, just as I believe that it is okay for people to wear hair pieces, wigs and weaves as a beauty device. All of these efforts are an attempt to improve one’s beauty potential. None of this has to do with cultural appropriation, it has to do with the beauty enhancement for the particular individual. It is their choice to experiment and have fun with their body. For example, Beyoncé looks beautiful in a blonde wig even though that is not her natural hair.

Spray tanning shouldn’t have a negative connotation. Spray tanning has nothing to do with culture. It is designed to mimic being in the sun. People want to look like they have been at the beach even when they haven’t.

The question of whether the tan is natural should not matter. It should be widely acceptable and not viewed as offensive because many other races practice beauty changes that hold the same ultimate purpose of spray tanning.
This is the same concept as lip filling, another beauty tool that has been falsely accused of being cultural appropriation. It has become more popular for people to inject their lips with collagen to give them a fuller look. This arose around the same time people started using Botox to erase wrinkles and lines. Both of these are efforts to look younger and more ideal. Except for the most extreme cases, this has nothing to do with black or any other culture, it is solely youth and standards of beauty as we understand them today.

It is also important to understand that spray tanning, the majority of the time, gives the individual’s skin an orange tone rather than a brown tone. Tanning one’s skin does not make them a different ethnicity. Ethnicity is not only about one’s appearances, but also their origin. If one race cannot alter their appearance the way they were born, then no one else can. This is not the world I want to live in. I would like to embrace beauty in all the multi-faceted expressions that it can embody. That is the sole objective of beauty.

I do not want to live in a world where beauty is decided on where you come from. In the end, there is beauty everywhere in every aspect that we can imagine.

There is so much beauty in the world that I believe it is acceptable, almost necessary, to share and accept it. We are so lucky to live in a country where we have the freedom to explore ourselves and appearances so I believe we must take advantage of those freedoms. You do not have to agree with me; however, I must ask that your beliefs stay consistent for everyone as it is only fair

But beauty can be a beast

While most white or light- skinned people might use spray tans to avoid looking washed out, there is a new trend in spray tanning to produce much darker skin tones.

This extreme spray tanning is a form of “blackfishing,” “a recently coined term used to describe someone accused of pretending to be black on social media by using makeup, hair products and in some cases, surgery to drastically change their appearance,”according to British online publisher The Independent.

Aga Brzostowska, a 20-year-old from Poland, became the face of blackfishing in 2018 when she posted a picture of herself at 13. The image was compared to her post on Instagram and highlighted the fact that she’s now darker, with thicker features and fuller lips. Not only had the influencer been applying spray tan but admitted to wearing darker shades of makeup and box braids.

In an interview with BBC, Brzostowska remained unapologetic. “With things like tanning, I don’t think I’ve done anything in a malicious way,” she said. “So I don’t feel like I need to stop doing something because… why would I stop doing something that’s benefiting me or that I enjoy doing?”

While most spray tanning will never approach blackfishing, it can serve as a gateway drug to cultural appropriation.

From the perspective of a person of color, spray tanning can be highly offensive.

Not only does spray tanning disrespect people of color, but not acknowledging the problems behind it shows lack of respect for our struggle.

People of color have dealt with “colorism” since long before spray tanning became possible. According to studentpress.org, colorism is “a system of discrimination in which the degree of lightness in one’s skin is compared to other members within the same racial group.”

Historically the lighter you are the more privilege you receive, especially as a woman. As a whole, America has prioritized lighter women over those of darker skin tones. Actress Lupita Nyong’o, a native of Kenya, has always recognized the differences.

“I definitely grew up feeling uncomfortable with my skin color because I felt like the world around me awarded lighter skin,” Nyong’o said in an interview with BBC. “Race is a very social construct, one that I didn’t have to ascribe to on a daily basis growing up.”

In the 1920s, the Cotton Club used the “Brown Paper Bag Test” to determine who was light enough to perform there. Only those with skin lighter than a paper bag were permitted.

Black women have been described as the most unattractive women in America. Women with big lips, kinky hair, wide noses and dark skin have had to fight for recognition and the right to be considered beautiful.

The problem is that white people can borrow black cul- ture without dealing with the problems that come with it. It calls into question the idea of beauty standards and how is it acceptable for white people to become darker while black people are fighting to become acceptable to society. If we let you have this part of our culture then what is the point of race? When you disregard that this is a problem that comes with tanning then you silence the people who are affected by it.