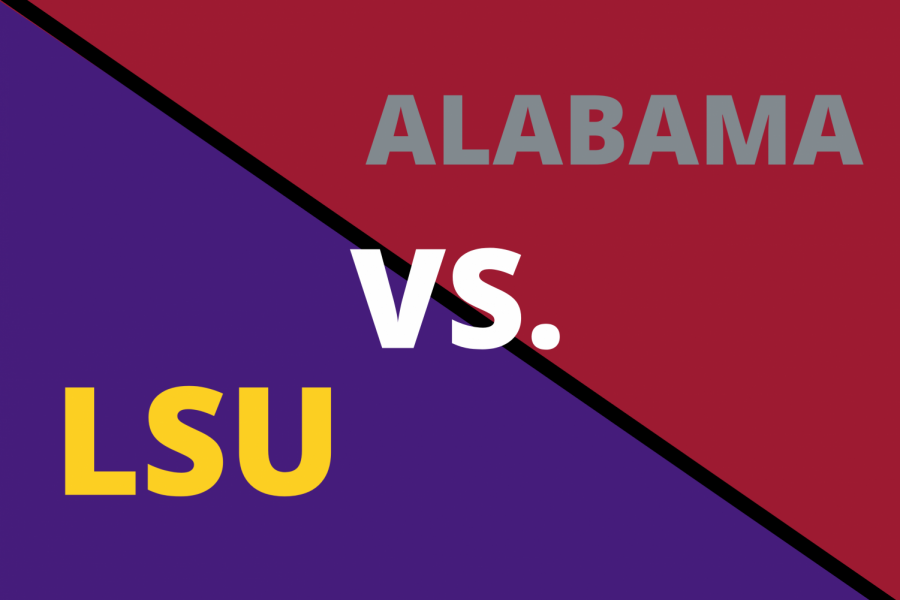 Clash of the Titans: Alabama and LSU Battle It Out in Tuscaloosa

With everything at stake, SEC West superpowers LSU and Alabama met on the gridiron in Tuscaloosa for a massive showdown between two top four teams, with Alabama being ranked third and LSU second. It was a game for the ages with quite a bit of fallout. With Allison being a die-hard LSU fan and myself being a die-hard Alabama fan, we decided to give our takes on the game from the point of view of serious fans. If you missed the action last Saturday, I highly recommend looking up some highlights. You won’t be disappointed.

LSU has had one of the best seasons they’ve had in a long time. Coming off big wins against Texas and Florida, they have never had a more perfect opportunity to create one of the biggest upsets of the year.

Let’s start with the offense. LSU’s go-to offensive play is an inside slant from Joe Burrow to Justin Jefferson. The biggest question is what happens if the Alabama defense shuts down this play? Will Burrow be able to stay consistent with his long downfield passes or will the offense turn more run based against an intimidating defensive line? If they turn to the run, it’s all up to Clyde-Edwards Helaire. If the offensive line can get him in to open field territory, he can take the ball to the house. LSU has also begun to run the hurry-up offense as well, but we haven’t seen it as much in recent weeks. Will they bring back the hurry-up offense this weekend?

The next big question comes about the defensive line. Two weeks ago in the Auburn game, the defensive line looked extremely weak and easy to penetrate. How can LSU stop Bama’s run game and/or passing game if they can’t get pressure on Tua? Stingley and Delpit are gonna have to be on top of their pass defense as well. They are two of the best defensive players in the country, but one pass-interference call, missed interception opportunity, or even letting any Bama receiver catch the ball could be detrimental. The LSU defense is going to have to be on their A-game. Burrow and the offense are also going to have to play harder and faster than they ever have before if they want to give LSU a chance of winning.

As an LSU fan, this was one of the most nerve-racking, but rewarding games I have watched in a long time. LSU came out strong by converting a fumble by Tua into the first of many touchdowns. The offensive line gave pretty good protection to Burrow, but still caused him to scramble a little more than usual. At some points, it seemed that Burrow was beginning to become a little frazzled by the defense and the atmosphere. He still came out of the game throwing 31/39 for 393 yards while also rushing for 64 yards. I think it’s safe to say Burrow kept himself in Heisman contention. Clyde Edwards-Helaire also had an amazing showing. He rushed for 103 yards, had 3 rushing touchdowns, and one passing touchdown. Ja’Marr Chase also showed out well putting up 140 receiving yards as well as a touchdown. The offense could always use a little work but overall, they seemed to have a solid night.

The defense put up a strong front in the first half, but weakened significantly in the second half. They held Alabama to only 13 points in the first half, but allowed them to score 28 points in the second. Patrick Queen was able to pick off an interception late in the second quarter which was converted to a touchdown putting LSU ahead 33-13 at half time. To start off the second half, Burrow was sacked and fumbled the ball, which was recovered by the Alabama defense. It wasn’t until halfway through the third quarter that Alabama scored again, but when they did, it completely changed their momentum. They played like the Alabama everyone knew them to be: the Najee Harris and Tua Tagovailoa show. Harris was being defended by LSU’s Derek Stingley, one of the best cornerbacks in the country. Stingley rarely gets passed on but when he does it usually results in an incomplete pass. Last Saturday was completely different. Every pass Tua made to Harris when he was one-on-one with Stingley was almost always caught. This may have been one of the biggest surprises of the game.

Next up comes the talk of LSU’s now growing playoff chances. With 2 of the current top 4 losing last weekend (Penn State and Alabama), does this give LSU a greater chance at solidifying a playoff spot? Will Alabama still get in after losing a home game to a top-4 team? What happens if LSU wins out, makes it to the SEC Championship (most likely against Georgia) but then loses? There are many questions and possibilities about how this game might affect either teams playoff chances but in LSU’s case, it just adds to their already impressive resume and makes their case for a playoff spot more convincing.

Heading into the game, the biggest question mark was the health of Heisman Candidate Tua Tagovailoa, who sustained an ankle injury in an earlier game against the University of Tennessee. However, after surgery and rehab, coach Nick Saban said that Tua will be ready to go. I think that Alabama must have Tua to win this game, but it will be a matter of if his newly repaired ankle will hold up or not.

The Alabama defense has looked a bit iffy at times thus far, and I know that LSU has the ability to put up a high number of points. The ability to get the ball to receivers Jerry Jeudy and Henry Ruggs will be key, and if that isn’t possible, the Tide will need to rely on the ground game, with the offensive line and Najee Harris being responsible for that.

I don’t know how this game will turn out, but there is a very good chance that it will not go Alabama’s way. But if the Tide manage to pull off a win with the home crowd behind them, they will basically be a lock once again for the College Football Playoff. Roll Tide!

This was a very close game that could have gone either way. Alabama was awful the first half and spent the rest of the game playing catch-up. The Tide have always been a second-half team, but that does not excuse the number of mistakes that were committed throughout the game. The fumble by Tua on the first drive was inexcusable. I understand that he just came from surgery on his ankle, but he simply dropped the ball on what could have been a scoring drive that could have made all the difference. Not only that, but the defense appeared to have no idea what direction to go in on their own field. I guess Saban had them memorize a map or something, because they looked much better after halftime. What made me grind my teeth was the sheer amount of penalties that the Tide committed in the game. You can’t kill yourself with penalties, and Alabama has been pretty good about that with the exception of this game. I think what Alabama needs is a chance to take a breath, analyze what went wrong, learn from it, and rebound. The game’s highlights for me were Jalen Waddle’s punt return touchdown in the first half (he looked like he got slingshotted and then shot out of a cannon) and Tua Tagovailoa’s final touchdown pass, an 85 yard rocket to Devonta Smith that put the game back within reach in the final minutes.

All in all, it was a great game to watch, and Alabama just can’t win them all. A 5 point game is absolutely respectable, and Alabama has a chance to learn from their mistakes and to improve before hopefully playing in a rematch in the College Football Playoff (fingers crossed).