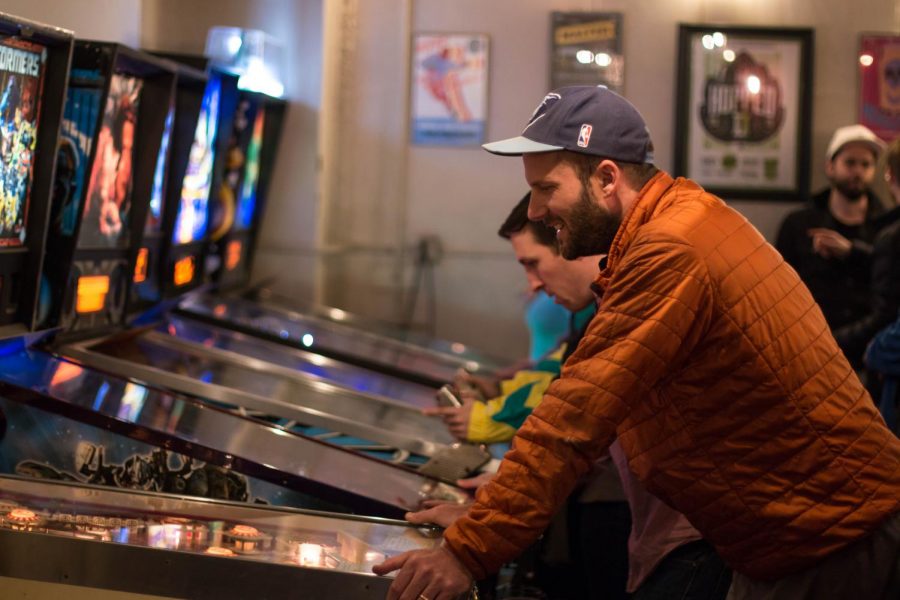  Mr. Sullivan focuses his attention on victory over his opponents. He started playing pinball as a college student in Santa Barbara, Calif. and has loved the game ever since.

Pinball seems like a ghost of the past, haunting the shadowy corners of pizza places, bars and laundromats. A remind- er of a distant era, way before apps or Fortnite. But, the new (or perhaps old) sport is emerging across the city of Memphis. With a dedicated following and new players every year, pinball is bringing people together from far and wide.

Mr. Ethan Sullivan, a St. George’s chemistry teacher, first experienced pinball as a graduate student in Santa Barbara, Calif. at a local pizza place with cheap pas- ta and pinball machines. He and his friends bonded over the game, and he brought that love for it with him when he moved to Memphis.

“I thought that it was just like try to keep the ball alive,” Mr. Sullivan said, “It turns out that pinball games are much more complicated than just keeping the ball alive. There is always a rule set and goals and things that you are trying to do, and I just fell in love.”

In the summer of 2017, Mr. Sullivan managed to place seventh in the annual Tennessee state tour- nament. However, Mr. Sullivan has recieved some skepticism about his “pinballing” from the uninitiated.

“I mean, I try not taking anything personally as a life rule, but you do get that response, that

people think it’s silly,” Mr. Sullivan said. “When they realize that you’re dedicated to it, they have a different impression, a newfound respect.”

Junior William Wilson found out about Mr. Sullivan’s love for competitive pinball one day after class ended, when Mr. Sullivan pulled up the standings for an upcoming pinball tournament.

“I think it’s pretty cool because most of the time we don’t know about our teachers lives outside of school, so it’s really cool to see another side of their personality,” Wilson said. “His personality is just [to] try everything.”

Sullivan brought that adventurous spirit with him to the Memphis competitive pinball scene.

“When I moved here to Memphis a couple years ago, one of my wife’s friends from childhood just totally coincidentally happened to be super into pinball,” Mr. Sullivan said, “and not only that, but she was starting up the competitive scene here.”

Ms. Ace Madjlesi first discovered pinball in college due to social anxiety, when she realized that pinball was a way for her to go out with friends but avoid talking to people.

In 2006, her sister moved to Portland and introduced her to competitive pinball, and Ms. Madjlesi started to compete whenever she visited.

In Memphis, where she lived and worked after college, pinball was not accessible. Ms. Madjlesi decided to build the pinball scene from the ground up.

“If I saw a laundromat I would just pull over and check for pinball machines,” Ms. Madjlesi said.
“I literally did not have enough pinball machines in one place to host a tournament.”

With plenty of new high scores to set and people to meet, pinball in Memphis is only growing. “You put the pinball where the people are,” as Mr. Crews says, and the rest is history–or future, depending on how you look at it.