St. George’s takes steps to ensure that sports programs are here to stay 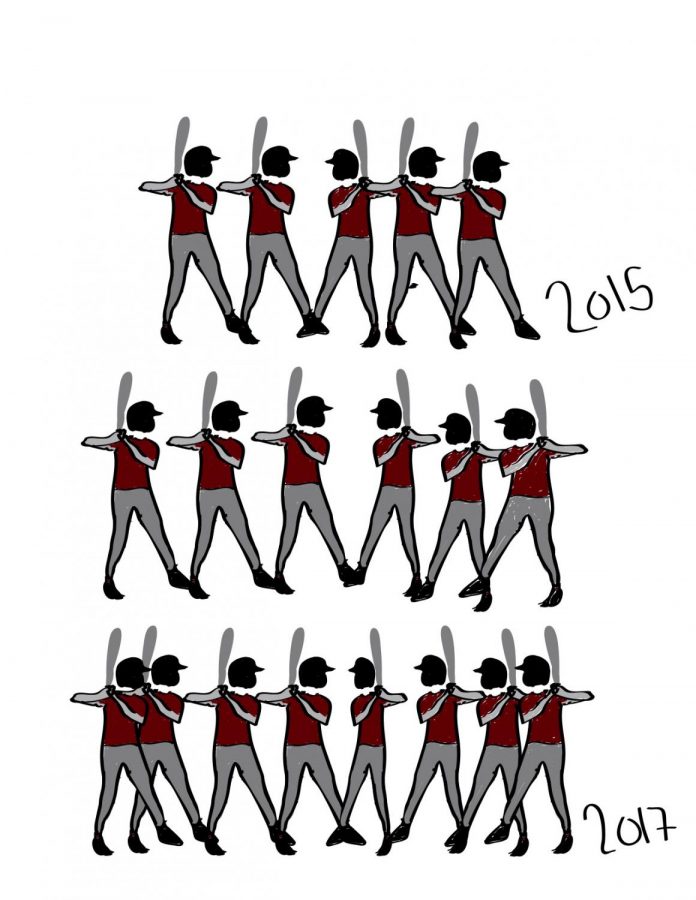 In 2015 the football photo in the yearbook showed 49 players, yet this year it will show just 36. Similarly, the varsity girls basketball program’s numbers fell from 16 players to eight players from 2016 to 2017. While the varsity softball team increased from nine to 14 players from 2015 to 2017, there is no longer a middle school program to feed into the upper school. As the size of individual sports programs fluctuate, some have raised concerns that they may not be sustainable.

“We are a smaller school, so it’s hard sometimes to get the numbers,” senior Prefect of Athletics Nick Bourdeau said. “It’s really important to field teams that are high caliber, and that’s hard because from time to time we have small dips in participation.”

St. George’s is not the only institution facing a decline in the number of students playing certain sports, which is likely a result of overall school enrollment. This decline is cyclical and an issue that other schools are also facing.

“We are all noticing a decline across the board in independent school enrollment, so everybody’s down with maybe one or two exceptions,” Upper School Director Tom Morris said. “Naturally fewer kids coming to independent schools means fewer available kids for programs inside those schools whether those programs are artistic, athletic, co-curricular or service.”

While some individual team numbers seem to be declining, others are growing, and overall numbers of upper school students playing sports have actually remained consistent. This year, there are 205 students playing a spring sport in the upper school, and last year there were 206.

In the meantime, the athletic teams have continued to win state and regional championships. This year the girls varsity soccer team won the state championship, the boys and girls cross country teams won regionals and the cheer team finished seventh in the nation.

“Look carefully at the record of our teams. We have hugely successful teams,” Middle School Director Mrs. Traci Osterhagen said. “Our coaches are knowledgeable. They are helping develop kids really well.”

Even individual teams that have faced smaller numbers are succeeding. While it seemed like the varsity girls basketball team would struggle this year with only eight players, they placed fourth in the region and continued even further in regional play than the varsity boys basketball team with 13 players.

Nevertheless, the school is working to bridge the gap between middle-school and upper- school athletes to ensure that programs are sustainable for the long term.

“We’ve been talking about program thinking,” Head of School Mr. Ross Peters said, “which is that all athletes in a program from the lowest grade to highest grade feel that they are part of the same program.”

As a member of the varsity football and baseball teams, Bourdeau is leading the way for advocating for younger athletes. In the fall, he created the Captains’ Council in order to call senior leaders to discuss how to improve their programs and integrate younger athletes.

The Captains’ Council recently made a visit to the Memphis Campus where the captain of each varsity team was able to talk about their sport and encourage younger students to play.

“I think sometimes the younger Gryphons don’t really know what’s going on or they’re intimidated by us,” Bourdeau said. “We just have to work on getting closer to them, getting people to their events, making sure they know that we are watching them and they’re coming to support us.”

Bourdeau recognizes the importance of communicating with younger athletes and the encouragement that older students can provide.

“One day they might even play with us depending on what grade you’re in,” Bourdeau said. “It’s not that intimidating. It’s just getting them comfortable around us in an encouraging atmosphere.”

Alongside the Captains’ Council, the school also recently hosted a gryphon expo for eighth grade students where they participated in high school classes and were able to speak with junior and senior leaders of clubs and sports teams.

Senior Kirby Betchick represented both the girls soccer team and the St. Jude club and thought the event was impactful.

“It was fun to see all the opportunities the school offers in one place,” Betchick said. “I hope the rising freshman will take advantage of all those opportunities.”

Individual teams are also putting in effort to bridge the gap. The varsity volleyball team created a “big sister-little sister” program where members of the upper school teams were paired with members of the middle school teams to take part in joint practices and dinners.

“I feel like cheering them on at their volleyball games, playing games with them and haiing a connection with them went a long way in encouraging them throughout the season and further into volleyball,” Smith said.

Coach Haley Gilmore, varsity girls basketball and softball coach, remembers what it was like to form closer relationships with older teammates.

“I remember being in the seventh grade and our varsity girls basketball team went to state,” Coach Gilmore said. “When they would see me in the gym they would say, ‘Hey you want to shoot? You want to go through some drills?’

The time and attention that older athletes put on younger athletes makes a difference as those younger kids often look up to students that are older than them.

“All of those little touches encourage people to participate in them and also create really positive experiences and relationships between older and younger students,” Mrs. Osterhagensaid, “and that will help build the program.”

Relationships like these can help younger athletes adapt to the more intense varsity schedules.

“The demand is more. You go from averaging three to four practices a week to five upwards of six sometimes. The competition level obviously increases,” Coach Gilmore said. “You are thrown in the mix and have to play against bigger, older, faster competition.”

But Coach Gilmore, who played sports up to the collegiate level, encourages students to continue with their sport as they will learn in a unique way.

“That perseverance that you had to have that commitment, that you forced yourself to continue through to the end, that’s going to make you a better person,” Coach Gilmore said. “There’s so much about team sports that emulates life that I don’t think you can find anywhere else.”

Mrs. Osterhagen echoes this encouragement, advocating for students to try something new.

“I would encourage them to try something new,” Mrs. Osterhagen said. “One of the things that I really appreciate about St.George’s is there is an opportunity for students to try new things.”

Even if students do not make a team or choose to stop playing, there are ample opportunities for students to be involved in a particular program.

“We’ve had kids that try out as a ninth grader and were managers but still practiced with the team,” Athletic Director Tom Densford said, “and they ended up playing on the varsity team as seniors.”

Athletics serve as a common ground for a community to come together and support the school regardless of the number of jerseys being used. Mr. Densford’s favorite part of the athletic program at St. George’s is the way that the student athletes love each other.

The appreciation that athletes have for each other contributes to the success of teams and provides a greater meaning than simply winning or losing.

“When the big moment comes, when you have that opportunity to go play in a semifinal or state championship, the moment is not too big because it’s not about the moment,” Mr. Densford said. “It’s about how we’ve worked hard together, and we played for each other.”

Mr. Peters emphasized the holistic view of the importance of athletics.

“What we look for is, ‘Are kids learning? Are they cared for and supported? Are we growing on our end as a school?’” Mr. Peters said. “We see schools losing perspective on what’s important in athletics and compromising who they are as a school in order to win state championships, and that is not us.”

In addition, he said the school is working to have athletics help accomplish the school’s overall goal of helping students grow and flourish in their years after high school.

“[Our coaches] are building a program,” Mr. Peters said. “They’re teaching skills, they’re building players from the inside out. That doesn’t happen overnight.”

He stressed that St. George’s strives to focus on the growth of its students and the school community in addition to winning games.

“We have people that are on teams, work in the garden and are connected to the community, and are good students,” Mr. Peters said. “We are graduating awesome kids, who are not just going great places but ready to contribute when they get there. Athletics have a huge, huge role to play in that.”

A previous version of this story lacked some context from our reporter’s interview with Mr. Peters. That has been corrected to better represent the full scope of the interview.