It is an event that is central to campus life at St. George’s, but how much do you really know about it? 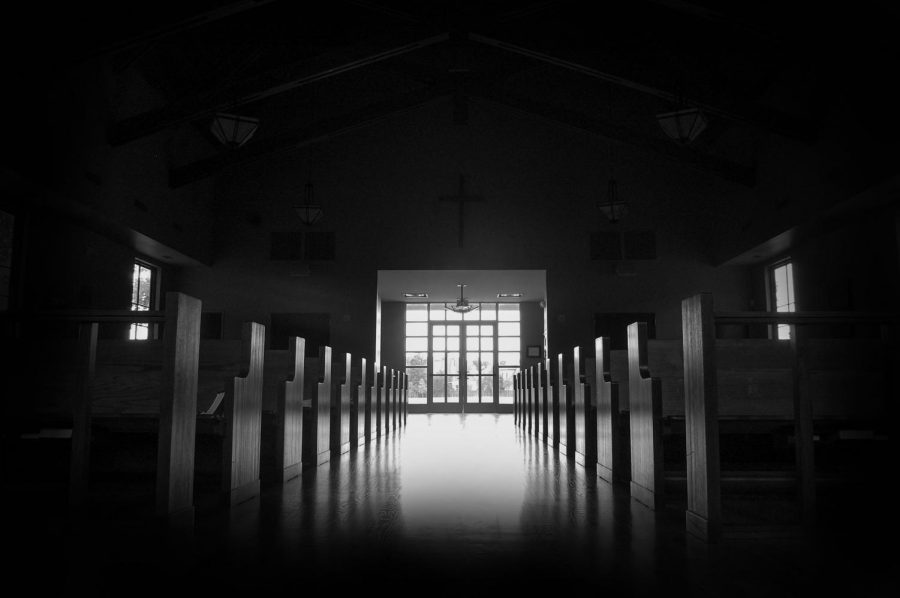 To some students, the changes to chapel services this year may have seemed small: we do not say the Pledge of Allegiance, we no longer recite the Honor Code, though both remain a part of assemblies, and in place of former chaplain Mr. Brendan Gorham, we have new guest chaplains for each service. Some may not have even noticed that anything changed significantly.

But, while these visible changes may be small, understanding the reasons behind them requires one to go back nearly six decades to the very founding of St. George’s and the core of its identity.

When the St. George’s Germantown campus was founded, a parish school was created, meaning that St. George’s Day School – St. George’s Independent School prior to its renaming in 2004 – and St. George’s Episcopal Church shared a religious identity, property and funds.

For years, this parish relationship was beneficial to both parties: the church supplied the school with a religious identity while the joint campus allowed both to function without paying for the construction of a new space.

In the late 1990s and early 2000s, this relationship changed. During this time, St. George’s Day School began a capital campaign to raise funds for the construction of the Collierville Campus. As the school’s funds for the project began to grow, the relationship with the parish school made it difficult to discern which funds belonged to the school and which to the church, and questions arose as to what the church’s role would be on the developing campus.

Those conflicts culminated in complaints registered with the Germantown Municipal courts on Sept. 12, 2003, leading to nine-month conflict with the church that ended on 29 Jun. 2004. During this span, the two sides were required to communicate via arbitration, using mediators to resolve the issue in an effort to prevent a lawsuit from being filed.

With this separation, St. George’s lost the only religious identity it had ever known, forcing the school to decide whether or not the Episcopal identity was one it should maintain.

“What I love about the Episcopal Church is that it is grounded in both a belief in faith of a higher power and in reason, so in that exercising both faith and reason, there’s room for lots of people,” Associate Head of School Mr. William Bladt said. There is a belief that “every child, being a child of God, is endowed with gifts and talents that they have the wonderful opportunity to develop and then share with the world.”

It was this doctrinal inclusivity that led Mr. Taylor and the St. George’s Board of Trustees to realize that Episcopal beliefs remained in the heart of the St. George’s community, whether or not there was an official connection to the church.

“When we left, the Diocese [the governing body of the Episcopal Church] was very gracious and allowed us to use the Book of Common Prayer and to let us continue to say that we are in the Episcopal tradition,” Mr. Morris said. They “let us, in many ways, function and feel like an Episcopal School without necessarily being one.”

During the next six years, St. George’s remained closely associated with the Episcopal identity, which pushed Mr. Taylor to begin speaking with Right Reverend Don E. Johnson, the Bishop of the Episcopal Diocese of West Tennessee, in 2010 about St. George’s possible reaffirmation to the diocese.

“It began very slowly. He and I would have lunch together or we’d meet for coffee together,” Mr. Taylor said. “We’d just begin to try to say, ‘How can we make this happen?’”

As years went by discussing the logistics of reaffirming with the Episcopal Church, one of the greatest advocates for this movement learned that he would be departing St. George’s before an official reaffiliation could occur.

“About a year before I decided I was leaving to come back up [to Trinity-Pawling School in New York], I said to the Bishop, ‘At some point, I’m not going to be here anymore, and you and I have a very good working relationship. I’d like to see if we can fast track this,’ and the Bishop agreed,” Mr. Taylor said. “So I had tried to get [the reaffirmation] done before I left. The timing of meetings on the church side just prevented that from happening, but I’m delighted that it was able to happen [eventually].”

After the departure of Mr. Taylor, newly-selected Head of School Mr. Ross Peters continued Mr. Taylor’s work with the church.

Mr. Peters’s continuation of this work culminated with an official reaffirmation with the Episcopal Church in May of 2016, less than one year after his arrival on campus.

Although many administrators, including Mr. Peters, Mr. Bladt and Mr. Morris, believe this affiliation changes little regarding the school’s religious identity, the new relationship did necessitate closer interactions between members of the Episcopal Diocese and the school.

For example, Reverend John Leach of Holy Apostles Episcopal Church now maintains an ex-officio status on the St. George’s Board of Trustees, meaning he provides counsel to the Board as the Bishop’s representative but holds no official vote.

Alongside changes regarding Episcopal membership on the Board, St. George’s reaffiliation altered the religious requirements of its chaplaincy.

Last spring, Mr. Gorham announced his departure from St. George’s. During his time as chaplain, he had played an integral role in both giving and coordinating chapel talks for grade-level and division-level chapels. For the first time in 12 years, St. George’s had to begin a search for a new Collierville Campus chaplain. Only this time the search was different.

As an Episcopal school, St. George’s is required to employ an ordained Episcopal minister as the head of religious life on campus, which can add an extra layer of difficulty to the search.

In the spring of 2017, after an intense search and interview process, St. George’s believed they settled on a candidate, but as the school year came to a close, the candidate was forced to withdraw due to the complications associated with relocating to Memphis.

“We took a big step this spring and thought we had an answer that turned out not to play out,” Mr. Peters said. “One thing I know is I don’t want to make a bad hire.”

With the school year well underway, finding an ordained Episcopal minister has become more difficult as some potential candidates are still completing their studies at seminaries across the U.S.

“That means it would be a winter or spring hire, so we’re not likely to solve it this fall,” Mr. Peters said. “There are a couple candidates that I met in the process last year that I was really excited about, who were probably a year away last year, who might become candidates this year, and so I’ve stayed in communication with them.”

Despite this, the administration has continued to search for potential candidates, remaining “all ears” to hiring a chaplain this school year if the right person “walked out of the woods,” according to Mr. Bladt.

In the meantime this empty position has led members of the St. George’s community, including Lower School Chaplain Mrs. Jessica Abell, to assume new roles to ensure an ordained minister is scheduled to speak at Collierville Campus chapels and that speakers are also scheduled for grade-level chapels.

“We met as a group with Reverend Jackson, Mr. Morris, Mrs. Osterhagen-Brock, Mr. Link, Mr. Peters and Mr. Bladt, and we decided that we would divvy up responsibilities,” Mrs. Abell said. “I try to make sure that there is a member of the clergy here to speak at our big chapels on Fridays – our all-school chapels –
and try to make sure that there is a leader, whether that be Mr. Morris, Mrs. Osterhagen, Mr. Jackson or myself, as well,” Mrs. Abell said. “Then Mrs. Osterhagen and Mr. Morris take care of the more day- to-day chapels like the grade-level chapels.”

By involving more members of the school community, the school has been able to grow into its Episcopal beliefs and truly understand what that identity entails.

“I think that there are some drawbacks to it. I’d rather have it all in place, but there also are some advantages to this in that we have to bear the weight of the chaplaincy as a school and build those muscles up,” Mr. Peters said. “I think what we’re having to do is compensate for that loss, and I think in the wake of that we all get a little bit better at being members of an Episcopal School.”

Not only has the absence of a chaplain allowed the school to grow into its Episcopal identity but it has allowed individuals to determine what qualities it wants to look for in potential candidates.

Prefect of Chapel Caroline Zummach hopes any chaplain candidates would be willing to become deeply involved with students in our community.

“I would want a chaplain to serve not only as a public figure but also someone that students could come talk to if they need help or just need another adult perspective,” Zummach said. “We want someone whose door’s always open, and we can go talk to them about anything. Someone who you’re not afraid to ask questions, but they also know how to engage students when they’re talking to them.”

Like Zummach, Mr. Bladt also hopes a new chaplain will have greater interactions with the student body, specifically in regards to their spiritual journeys.

“My dream of that perfect person is somebody who kids could have the opportunity by themselves or in small groups to actually like have a chaplain that they could visit with and  spend time with, that they can explore their own journey of spirituality,” Mr. Bladt said. “In a totally non-judgemental way, I want somebody who, as an Episcopal Minister, has a really wide belief system – that it’s love for all people, no matter what they believe and whether you’re a Baptist, or whether you’re an Evangelical, or whether you’re an atheist, whether you’re a Jew or Muslim – and you could actually find a listening voice of a kind heart as you go on your own personal faith journey.”