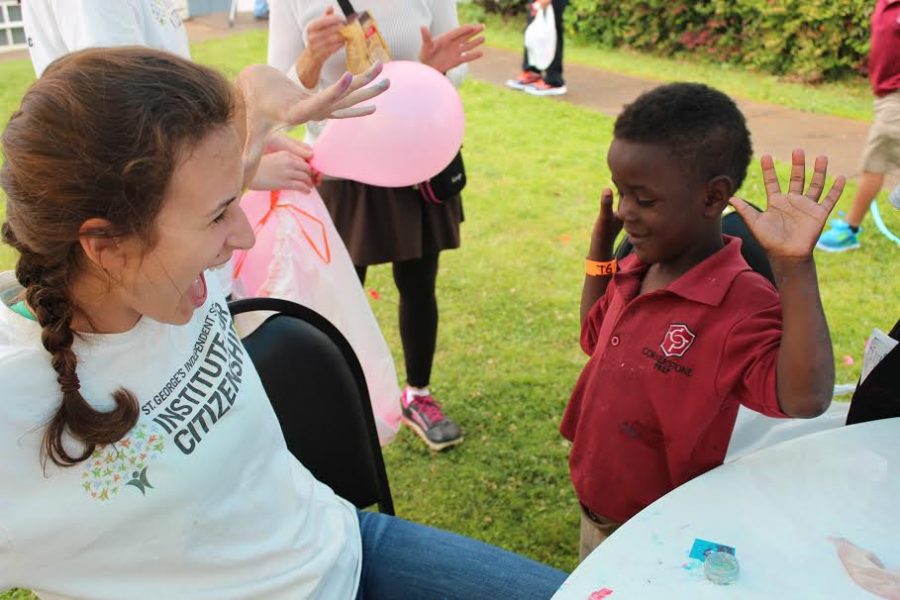 This event helped over 200 children from the Memphis area and refugee organizations receive shoes after volunteers completed a ceremonial foot washing.

Mr. Jason Hills, head of the Institute for Citizenship, believed the event helped demonstrate students preparedness for the real world.

“I think the ultimate thing that speaks to me is that students are capable, especially trained in this atmosphere at St. George’s, a lot more than adults generally give them credit for,” Mr. Hills said. “Problem solving, collaboration, patience, I got to see all of those mature professional qualities right here in our juniors and seniors.”

During the event, students got to know the children by interviewing them, washing their feet, giving them shoes and playing outside with them.

“I was really surprised because I am in Helping Hands, and when some of those kids came in, I knew them. I was shocked because I wasn’t expecting them,” Junior Kate Seabrook said. “They all ran up to me and were like ‘Kate, hey! hey! hey!’”

“When you looked out into the faces of the people there, the volunteers and the children getting served, you just saw this sea of people from all over the world,” Mr. Hills said. “It was almost like the world was coming together at this tiny little church building in Memphis.”

Some of the children were new to the United States and could not speak English, which caused students to have to find other ways to communicate with them.

“Carlos [Rivera Peraza] was right next to me, and when they brought in a bunch of people from Latino Memphis, he started talking to them in Spanish,” Seabrook said. “You could just see them light up because they finally felt comfortable by just talking.”

Senior Grace Optican, who holds a position on the Citizenship Council, enjoyed leading and attending the event.

“You get to see hope in their eyes,” Optican said. “All of Samaritan’s Feet is about showing that there is a hope for the future and that we can obviously be meeting someone who’s going to change the world, find a cure to cancer. These kids are brilliant, and they have to find their way. We are just helping them along that path.”