Grand slam of a game 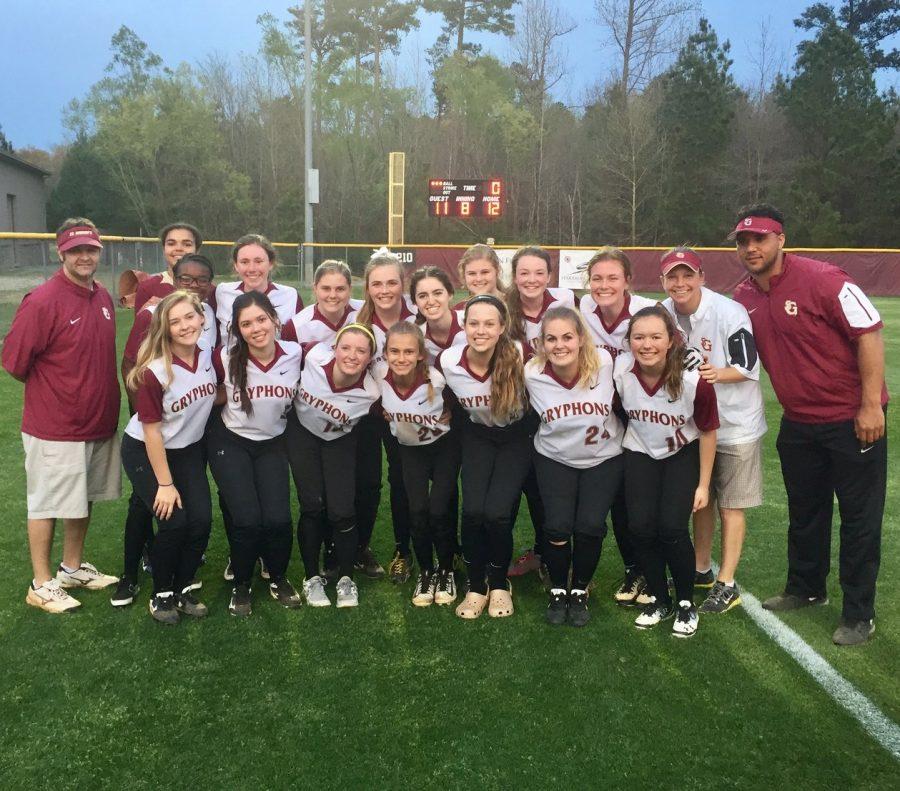 The softball team poses in front of the scoreboard after winning their game against the St. Agnes Stars. The 12-11 win was their first win of the season.

Down by four in the sixth inning, the St. George’s Gryphon softball team fought their way back to win 12-11 after playing extra innings against St. Agnes on Wednesday, March 29. This was the first win for the team after loses to Fayette Academy and Harding Academy earlier on in the season.

The team was down the entire game, but in the seventh inning, they tied it up 10-10 after sophomore pitcher Lindsey Pepper hit a grand slam.

“I had a clear mind and tried to think of the positive and hit like I knew how to,” Pepper said when describing the thoughts going through her mind as she went up to bat with bases loaded.

After Pepper hit the grand slam, members of the softball team were very excited.

“Everyone was screaming. I ran out of the dugout and was next to Coach Todd, windmilling my arms and telling her to run,” junior Abbie Cloutier. “It was one of the best moments of this year so far for softball.”

Pepper finds inspiration from other players and the coaches when they are down in a game like this one.

“I usually have one person in the infield that I look to a lot, and lately it’s been Ellie [Franklin] on second base,” Pepper said. ‘Abbie’s been fun lately as well.”

Cloutier looks up to Coach Hannah Gilmore and finds motivation in her dugout speeches.

“Other coaches will say ‘you got this,’” Cloutier said, “but Coach Gilmore gives you specific things that you can work on.”

This win sets the stage for the Lady Gryphons as they prepare for the upcoming games against Rossville Christian Academy, a team the Gryphons beat in previous seasons, and the USJ Bruins, who had a record of 29-6-1 during last year’s season.

“I was proud of the way the girls played and their gritty effort,” Coach Todd said.

Players believe that this game is an indication of what the team is capable of in the future.

“It feels good because it shows who we are as a team,” Pepper said, “and that we can win and accomplish what we want to do.”