I read all eight “Harry Potter” books in a week 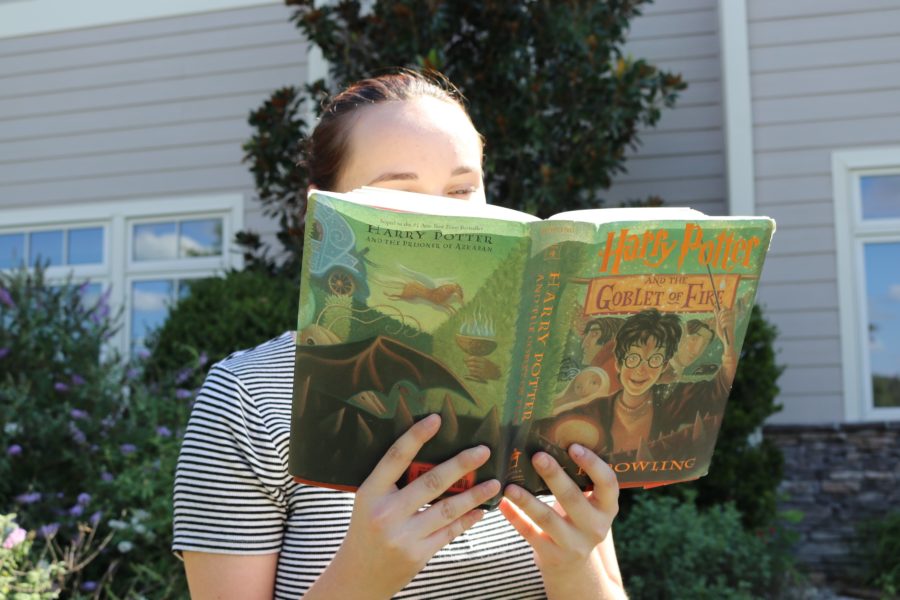 Like most millennials, Harry Potter played a significant role in my childhood— except that, prior to last Friday, I had never touched a Harry Potter book in my life. No, I didn’t read them on some early Internet website or check out audiobooks from my local library. I never read them, because, believe it or not, I was a brat.

Elementary-school Laura made the conscious decision to not read Harry Potter books because she believed doing things that everyone else did was lame. I have since learned to enjoy things, and my heart has thawed a little.
This adventure was just as painful as Harry’s scar. I have never been more stressed in my entire life. (The things I do for this paper, honestly.) However, to the dismay of my younger self, I actually enjoyed the books a lot. It seems that I am not immune to pop culture after all.

Prior to agreeing to, actually suggesting, this journey, my knowledge of Harry Potter was quite limited. Here is a list of things I knew, or at least.
1. There were wizards.
2. Ron and Hermione got together, but I didn’t know why.
3. There was a big snake.
4. Dementors and Death-Eaters were the same thing (turns out they aren’t).
5. Butterbeer was real beer (nope. it’s not real beer).

“Harry Potter and the Sorcerer’s Stone”
My introduction to this book was rocky. I started incredibly bitter, as I had no idea why I was reading what seemed like countless pages about the Dursleys. Since I didn’t live completely under a rock, I did know that Harry lived with his aunt and uncle, but it didn’t click with me until they were properly introduced as such. Apparently, I, like the intended audience of this book, have the foresight of an elementary-school-aged child.

Above everything, this book reminded me that I actually do enjoy reading. However, it also lulled me into a false sense of security. After finishing in about two and a half hours, though I did enjoy the book, I did not yet see why Harry Potter was such a phenomenon. The story was amusing and I enjoyed reading it, but this was still a children’s book.

“Harry Potter and the Chamber of Secrets”
The title of this book appealed to me immediately, as I had prior knowledge of the Chamber of Secrets. Well, at least I knew it existed. I had no clue what the Sorcerer’s Stone was. This book weakened my cool and calm aesthetic as I found myself…. caring about the characters. At one point while Harry was being yelled at by Snape, I was internally defending him. This was a little much for me, so I had to put the book away for a while.

The best part of this book is most definitely a quote by Mr. Dursley himself, in which he said, “WHAT HAVE I TOLD YOU ABOUT SAYING THE ‘M’ WORD IN OUR HOUSE?” the ‘M’ word referring to magic. This is the funniest thing I have ever read, including my own tweets.

You would think that with reading this book 18 years after its initial publication, I would be well-exposed to spoilers. You would be wrong. Learning that Tom Riddle and Voldemort were the same person was one of two shocking blindsides that I experienced while I read these books. Like I said before, I seem to have the foresight of an elementary-school child.

“Harry Potter and the Prisoner of Azkaban”
By this point, I had completely caved. I, Laura McDowell, liked Harry Potter. Please don’t make me say it again though because my past self might die of shame. This book introduced hoards of new characters, including Remus Lupin, the new Defense Against the Dark Arts professor (and a werewolf because apparently those exist,) Professor of Divination Sybill Trelawney, who predicts Harry’s death nearly every class (I also predict my own death nearly every class), and Sirius Black, the prisoner of Azkaban himself.

I owe Sirius my deepest apologies, as I believed until the bitter end that he was evil. This was my second blindside. When I learned that he and James Potter were best friends, I was personally offended. But, like the Ministry of Magic, I judged him before I had all the details.

“Harry Potter and the Goblet of Fire”
Picture this: me in my bed. It’s 2:00 a.m. I had just gotten ready for bed after finally putting down this book. After about 15 minutes of doing nothing but thinking about this book, I pick it up again. I loved this book. Other than being bitter towards Ron and Harry for fighting at the beginning, I loved every minute.

This book is what made me finally and completely buy into the phenomenon. It made every late night over the course of the past week-and-a-half worth it. If you’ve never read Harry Potter, a club of few that I have just exited, I would recommend it based solely on this book.

“Harry Potter and the Order of the Phoenix”
The high of “Harry Potter and the Goblet of Fire” was not long-lasting. As soon as I finished, I picked up this book, which is about 200 pages too long. I honestly don’t even know if I liked this book because I was annoyed the entire time, since it took what felt like approximately the rest of eternity to read. In reality, it was only three evenings.

Not only was it too long, but it hurt me to my very core. Please never speak to me about the fact that Harry didn’t open Sirius’ gift of a two-way mirror until Sirius was already dead.

“Harry Potter and the Half-Blood Prince”
This was another thing I knew! I actually had quite a bit of knowledge of this book, even though I’ve never seen the movie. I knew Snape was the half-blood prince. I did not, however, know what the horcruxes were. I have always wondered what they were, so I am kind of glad to finally understand what they are.

Honestly, why is Draco Malfoy such a garbage boy? Who hurt him? Throughout the entire series, I had trouble picturing Draco as a child because the amount of hate he possessed was astounding. Along with giving me more reasons to hate Draco, this book finally gave me an actual reason to dislike Snape. There’s nothing quite like disliking fictional characters so much that your blood boils.

“Harry Potter and the Deathly Hallows”
This book was a perfect end to the series. Do you hear that, J.K. Rowling? “The Cursed Child” is not needed. The book was a little slow at first, and since I wanted nothing more after a week of Harry Potter to finally be finished, that was quite unfortunate. And I missed Ron, a lot.

Once it started picking up the pace, it was just as good as I had hoped. There was a war! Fighting! Death! I feel it is important to note that I still don’t like Snape, and I do not care that I am supposed to feel bad for him.
This book gave me what I look for in a final book: There were no loose ends and no remaining questions. I was satisfied. After over a million words, I finally closed the pages to the last of the original seven Harry Potter books and left Hogwarts behind. And yes, I am glad I visited, even if reading the series made me just as stressed as Hermione is before exams.

P.S. As for “Harry Potter and the Cursed Child,” J.K. Rowling, I know money is great and all, but was this play really necessary?