A man and his megaphone 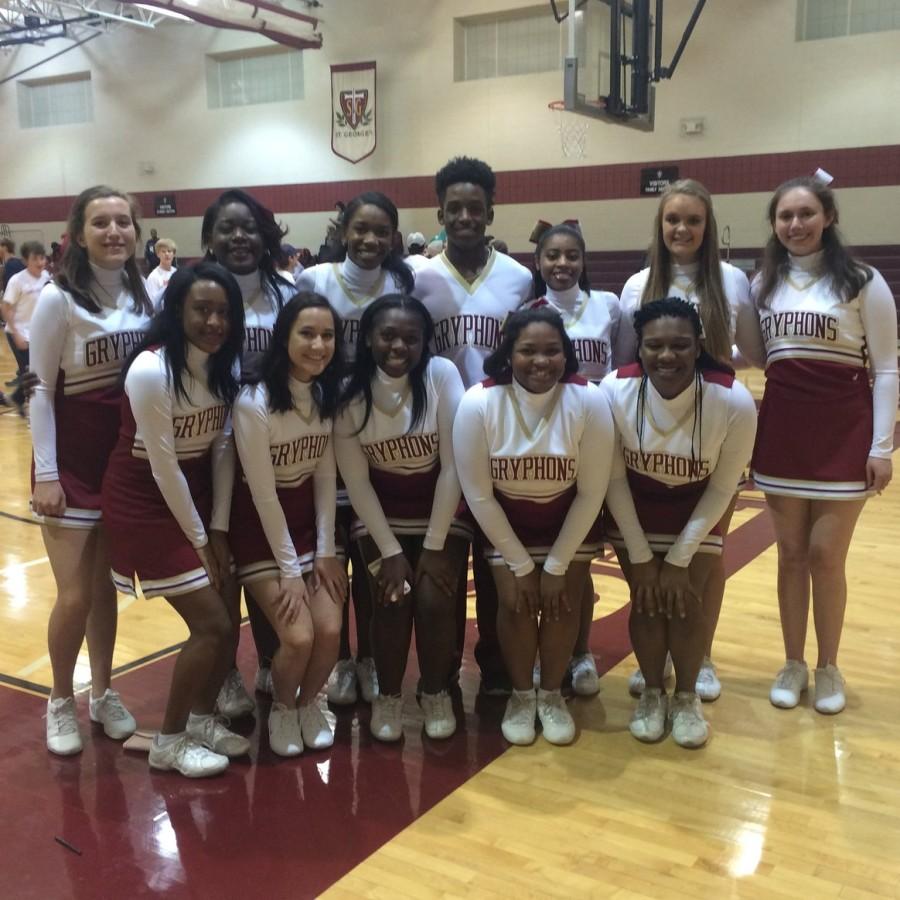 The winter cheer squad poses at a basketball game. JR joined the team this year, making school history as the first male cheerleader.

Shortly after winning a state championship in football, junior JR Upton decided to trade in his shoulder pads for a pair of pom-poms. In doing so, he became the first male cheerleader in St. George’s history.

JR initially expressed interest in joining the team during the fall when he was still playing football, and it took Ms. Sharon Lathum, the Executive Assistant to Athletics and winter cheer coach, by surprise.

“At first, I thought maybe he was [kidding], but we talked about it, and I knew he was very sincere,” Ms. Lathum said.

“I just thought it’d be fun to do something different,” Upton said. And, as promised, Upton joined the team after his football season concluded.

Junior Erica Alexander said that the whole squad was excited to have Upton on the team.

“Last year he was in the stands doing the same cheers, so it wasn’t a big deal,” Alexander said.

While the team may not have had to adjust, their coach certainly did.

“I actually went and watched college male cheerleaders and came back and let him know ‘while the girls are doing these moves, this is what you need to do,’” Ms. Lathum said.

After watching the collegiate cheerleaders, Ms. Lathum recognized that they all seemed to have one thing in common: a megaphone.

So, Ms. Lathum got him a megaphone.

“With his voice, he brings a whole new dimension to the sound of the cheers. I like it, and everybody who has come to me says it’s great,” Ms. Lathum said.

Upton has not just been drawing attention from basketball fans, however. According to Ms. Lathum, the woman who fitted him for his top “raved about how if he could learn a tumble or two, it could easily lead to a college scholarship.”

Upton has been practicing his tumbling, and since he has such a big vertical leap, it shouldn’t be a problem for him to continue improving.

Even though he is not be afraid to tumble, Upton admitted he was anxious about the reaction to him cheering.

“The first game when I went out, I was nervous because it was my first game cheering, and I didn’t know what people would think about me,” Upton said. “I just learned that I didn’t really care that much about what other people thought because I knew that I was doing it because I wanted to.”

However, this hasn’t stopped some of his peers from a having a little fun at his expense.

“He’s taken a lot of grief from his football team, but he handles it just with perfection. It doesn’t knock a shuck off of him,” Ms. Lathum said.

Even though his teammates from the fall have given him a hard time, Upton now has a new set of teammates who have his back.

“My girls love him, I mean that,” Ms. Lathum said. “They love having him around. He’s a great guy.”

As for being the only guy, Upton did not express being uncomfortable but rather says he enjoys his role as the only male cheerleader.

“Honestly, I like being the only guy with a bunch of girls, but that’s just me,” Upton said.

The team has adapted to accommodate for Upton, and he has worked accordingly to help them. Ms. Lathum laughed thinking that perhaps the biggest adjustment she has had to make was how she sends team emails.

“When I send emails, I’m used to saying ‘Girls’ and now I say ‘Girls and JR,’” Ms. Lathum said. “He’s a first and hopefully not last.”