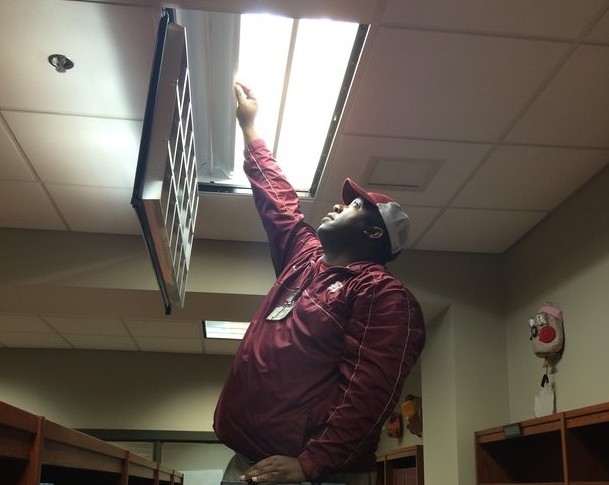 Mr. Ricky fixes a lightbulb in the library. Mr. Ricky has been responsible for much of the maintenance that is needed within the school for two years.

“Hey, Mr. Ricky! How’s it going?” These words are spoken dozens of times throughout each week in the halls of St. George’s to Mr. Ricky Higgenbottom, a kind and caring Facilities Associate and Transportation Specialist.

Mr. Ricky was born and raised in Oxford, Miss. He fondly remembers playing with his brother as a child.

“My favorite childhood memory would be at Sardis Lake,” Mr. Ricky said. “We used to take the cardboard and slide down the hill, and my brother and I would watch the fish come out of the dam.”

Mr. Ricky was previously employed by Premier Transportation, and St. George’s first became interested in him after being informed of his quality work and performance. Once his contract ended, he joined the St. George’s community as a bus driver.

Mr. Ricky said that he loves working at St. George’s, and he especially enjoys its family-oriented environment.

“I know that people know who I am, and they respect me.” Mr. Ricky said. “Even though I might not be in the limelight, I feel that I am a big part of the faculty.” And that he is. From fixing lights to driving the bus, Mr. Ricky can be seen anywhere helping out the St. George’s community.

“Mr. Ricky is super friendly, very talkative [and] very outgoing, so we hit it off, beginning to talk and seeing each other regularly,” Coach Whicker said. “He is a caring individual. He loves people and he actually cares about the needs of others and how people’s days are going.”

According to Coach Whicker, Mr. Ricky is also a man of great faith who inspires him everyday.

“He is a godly man who has a healthy fear of God, loves people and is unashamed about his faith, which has been a great encouragement to me by his life and our regular conversations,” Coach Whicker said.

Bus riders also share a similar appreciation and love for Mr. Ricky. Seventh-grader Luis Lopez rides the bus that Mr. Ricky drives everyday, and said he appreciated how hard Mr. Ricky does for his school.

“It is great that he takes time out of his day to drive us to the school and back. And, not only that, [but] he does maintenance around the school,” Lopez said.

“It has been a ball [and] this is where I want to be. I am not looking for another job as long as they accept me,” Mr. Ricky said. “My goal is to be here. I’m happy.”