Is your wardrobe dress code ready? 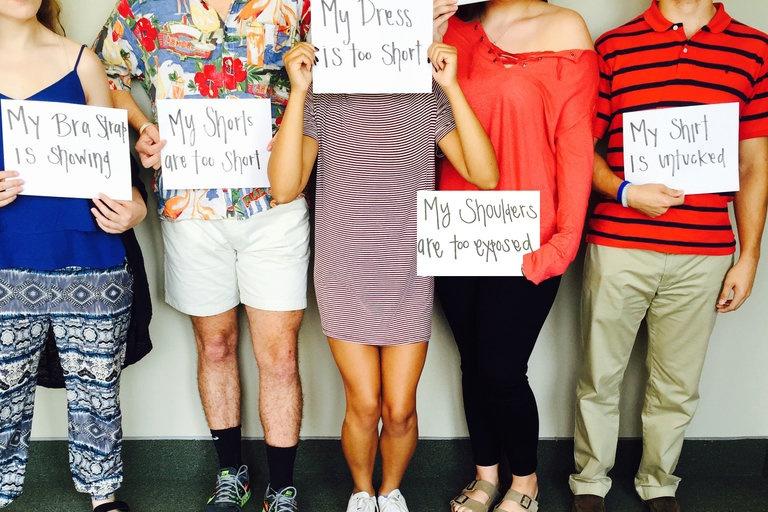 Junior Elle Vaughn is aware that she has received multiple referrals for dress code violations in the past, most often occurring in the hallways.

“It was pretty awkward and a little embarrassing,” Vaughn said. “It usually involves some of those awkward half-grins and nods.”

Her most memorable dress code infraction came during a dress code check in advisory when everyone stopped what they were doing and stood up to be looked over.

“I was singled out in front of my whole home base for a strapless dress, which was covered with a jacket, and that was really embarrassing,” she said. “It really feels like you’re being judged.”

Vaughn was not the only one who has suffered awkward experiences with dress code.

The new school year brought new changes to the dress code on the Collierville campus, which caused distress among many sixth through 12th grade students. Boys are now allowed to have hair longer than their collar, girls are allowed to wear sheer shirts, as long as an undershirt with at least two inch straps is worn underneath, and all students can wear backless shoes as long as they are not athletic flip flops.

“I love [the new hair length rule]. People should be able to look how they want, not how other people think they should,” prefect of the arts Harrison Schutt said.

While students were happy about the approval of backless shoes and longer hair, there was student-wide irritation over other modifications to the dress code. While many understood the purpose of these new rules, they did not feel like they were always practical.

“There is no such thing as a two-inch tank top,” sophomore Ellie Franklin said. “I would understand a one-inch tank top, but not two.”

Mrs. Underwood explained that the purpose of the dress code is to look classy, poised and polished, as well as to learn what is appropriate for various occasions now rather than later. She said that getting dressed for a semi-formal venue should be second nature by graduation.

Even though students understand the idea behind the new dress code, they have said that they often have to shop at stores geared towards adults in order to find school-appropriate clothes, voicing that there is a daily struggle to find clothing that fits the code and still allows them to feel like a teenager.

“The dress code should be more about looking good than fitting certain parameters,” Vaughn said. “If it doesn’t look inappropriate, then you should be able to wear it because there are ways to look nice without looking like a businesswoman.”

Students said that when walking in the hallways, they are more often worrying about whether they will get a referral than getting work done.

“If everybody got into trouble, then I wouldn’t be as mad when I get in trouble,” Mrs. Kalyn Underwood, the new upper school Dean of Students, said during a class meeting at the conclusion of last year. At the class meetings, students specifically asked for the dress code to be enforced more consistently.

While there are more referrals being handed out this year, not all are are devoted to dress code. More infractions are noted for chewing gum and not signing in and out of independent studies.

With the new changes in dress code brought modifications to the consequences as well. After the third referral, the student’s parents are contacted, and the student must either have appropriate clothing brought to them or must have permission to go home and get appropriate attire. During this time, the student will be out of class, which is registered as an unexcused absence.

Although many changes have already been made to the dress code already, it is still a work in progress.

“There a couple of modifications that I would like to make in the future,” Mrs. Underwood said. “Kids come in pretty regularly … sitting down telling me, ‘I think this’ or ‘this is something I would like to see different,’ and I try to make those requests happen because our situation is flexible.”