You Can’t Spell “Manipur” Without “I”

Reporter Ellie Christie reflects on her time in Manipur, India 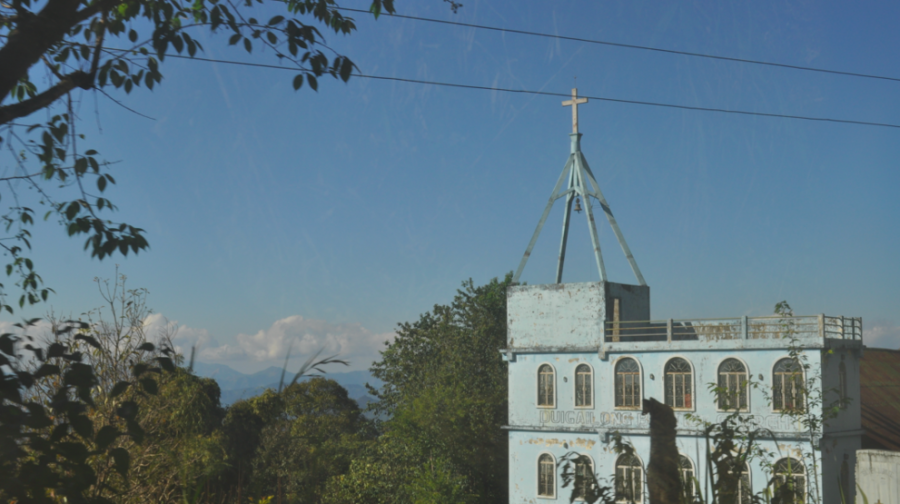 This is just one of many churches in Manipur.

In December of 2018, my family and I visited the place my mother used to call home: Manipur, a state in northeast India. We’d been to India before, but the places we’d visited were nothing like this. This wasn’t big-city Delhi where my cousins took me and my brother to get McFlurries. It wasn’t the beaches of Goa where I befriended the stray dogs who roamed the shore. Manipur is practically a separate country from the rest of India. Foggy mountains, massive lakes and orange trees, that’s Manipur. You could call it paradise. In fact, I will. It’s paradise.

My mom has always talked about her hometown so fondly, but would lament that her grandparents were no longer around. She’d say their absence made it near impossible for us to ever go visit. There was a time when I thought I’d never get to see where she came from, and that was complicated for me. I wanted to go, but I didn’t know if I deserved to.
She made it sound so wonderful, maybe too wonderful for the Americanized halfie that I am. I realize “halfie” is probably not in everyone’s dictionary, but it’s what I call myself all the time. Half white, half Indian, all different. I like the words “mixed” and “biracial” too, of course, but calling myself a halfie is a sort of inside joke. I get to make fun of the fact that I never quite fit in. I reclaim that isolating feeling.

My great-grandparents lived in Tamenglong, a village way up in the mountains. For some of her childhood, my mom had lived there with them. This was the place she’d talked about like it was heaven. Her grandfather was practically a king, she used to tell me, with a big farm and tons of grandchildren. Manipur is full of Christians, and my grandfather was the first one. There’s a church built in his honor that we visited. It’s beautiful.

It was in Tamenglong that we spent Christmas Eve and Christmas Day. Tons of relatives had gathered for the holiday, most of whom I’d never met. Most of the adults spoke English, and two of my cousins live in Delhi—a part of the country where English is more widely spoken—so they spoke it too. The younger kids didn’t, but we still had fun. They seemed to like being in pictures. I carried my camera around the whole time, and I was happy to put it to use for them. They all looked like I had when I was a child; it was almost like getting to photograph my younger self. Being around people I was related to, no matter how distant that relation sometimes was, felt good. I got to look around and see faces that resembled my own.

I’ve had more than one instance here in America where I’ve looked around and realized I’m alone. Usually, everyone around me will be white, but sometimes it’s that none of them are Asian, or none of them are Indian. It’s more than just being the only person of color, it’s knowing that my identity is completely unfamiliar to everyone else. Be honest, how much did you know about Manipur before you read this? Yeah. I’ve never been part of a group in which anyone other than my family is Manipuri. So getting to surround myself with people who not only knew the place from which I originate but lived there… There was a safety and comfort in that, one that I’d never felt until then.

To me, Manipur felt like a sort of home. I could hold my heritage in my hand and say, “I’m allowed to connect with this, it does belong to me, I’m Manipuri enough.”

That can be a hard thing to make myself believe. Imposter syndrome nags at me and says I have no right to my family’s culture, that I’m too white for it, that I’m not good enough to associate with my Manipuri heritage. But I know that’s not true. I could feel it while I was there. It was good for me. Honestly, I don’t know if I’ve ever been happier than I was while we were in Manipur.

Even while writing this, it’s a little embarrassing to claim Manipur as a home when I’ve only been there once. My mom and I are eager to go back, though. And I will happily recount every detail of the trip to anyone who wants to hear it. But, really, the feeling of being in Manipur was like nothing else. Something inside me felt safe, welcomed, and understood there. It helped me not only connect with my relatives and my mom, but myself. To me, Manipur is part of who I am. It’s in my face, my DNA, my heart.

Yes, I left Manipur, but it didn’t leave me.