We Won’t Know the Winner Tuesday 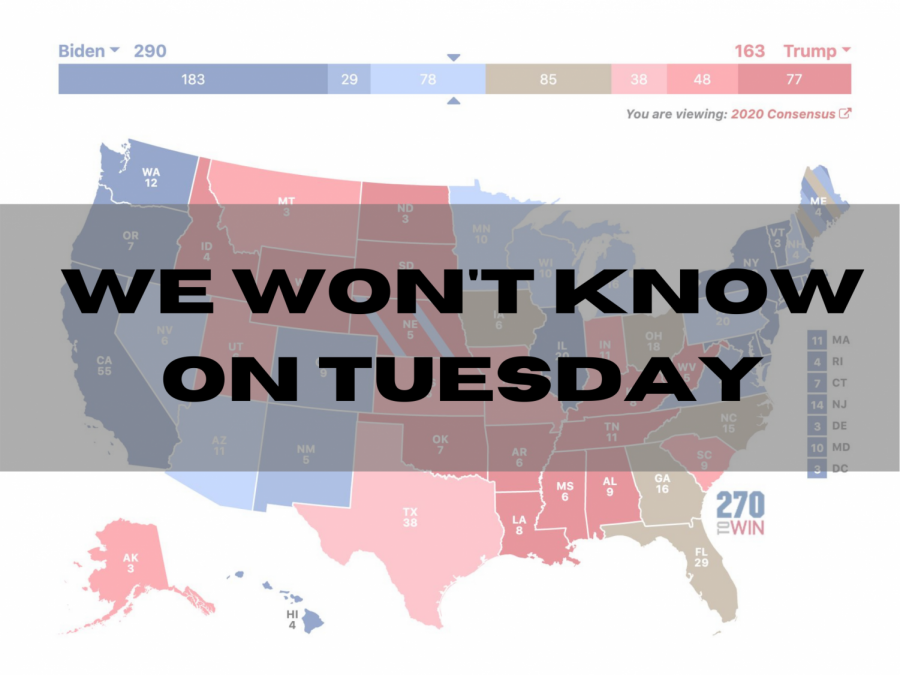 Tomorrow, the nation will wait for the results of this year’s presidential election. The reality of the situation is that we likely won’t know how the votes fall until later in the week, or even later.

One reason we’ll likely have to wait for results is an increase in mail-in voting due to the COVID-19 pandemic. The Bipartisan Policy Center, a D.C. based think tank, predicts that mail-in voting will account for 50-70% of each state’s total votes this year, which could potentially triple the typical number of absentee ballots in some states.

In states where the race isn’t expected to be close, like Tennessee, results will likely be predicted accurately on election night. But for states where the race is close, such as Georgia, Pennsylvania or Ohio, a delay in vote counting could force the entire nation to wait on battleground states to decide the Electoral College.

Polls indicate that the biggest battleground states in this year’s race include Pennsylvania, Florida, Michigan, Arizona, Wisconsin and Texas, along with a few others. If these states have close races that can’t be determined on election day, this is what the Electoral College map could look like Tuesday night. Click the map to create your own at 270toWin.com

The most likely scenario that would leave the Electoral College up in the air involves Pennsylvania. Some counties in the state will count mail-in ballots first, while others are going to count in-person voters first. This could skew initial results. Click the map to create your own at 270toWin.com

The scenario where the election comes down to Pennsylvania involves some swing state outcomes that aren’t too far fetched. It would require Trump to carry Ohio, Georgia, Florida, Arizona and Texas, all states that Trump won in 2016. It would require Biden victories in Iowa, Wisconsin and Michigan. These states would have to swing from 2016, but Biden holds significant polling leads in these three states. This would leave the Electoral College tied at 259, with only Pennsylvania left to submit electors.

The courts may have more influence over this election than the Electoral College will, as legal battles over vote-counting are already happening, and cases are expected to be fought over recounts. The Supreme Court has already ruled in different ways on multiple voting rules. For instance, the court ruled that in Wisconsin ballots must be received by election day, while in Pennsylvania and North Carolina, ballots have a grace period (three and nine days respectively) to reach counters.

If this election is close, we could see multiple recounts in states, as well as a potential legal battle fought between the two candidates over the way votes were counted, and the legitimacy of the ballot count in many states. The last time an election came down to a recount was two decades ago, Florida’s supreme court ordered a recount of nearly 70,000 votes across the state, which the federal Supreme Court ruled unconstitutional. George Bush was declared the winner of Florida, pushing him over the 270 electoral vote threshold despite the fact that Al Gore won the popular vote.

Notably, two of Trump’s Supreme Court appointees, Justice Amy Coney Barrett and Justice Brett Kavanaugh, worked with the Bush campaign to defend the Florida GOP’s effort to adjust about 1000 absentee ballots that had been filled in incorrectly and stop the state’s recount. Bush won the state by just 537 votes.

Only time will tell if we will see another legal battle over the results of the election. What we do know is that what we see at the end of the day on Nov. 3 may not be quite right.