One word sparks a world of controversy 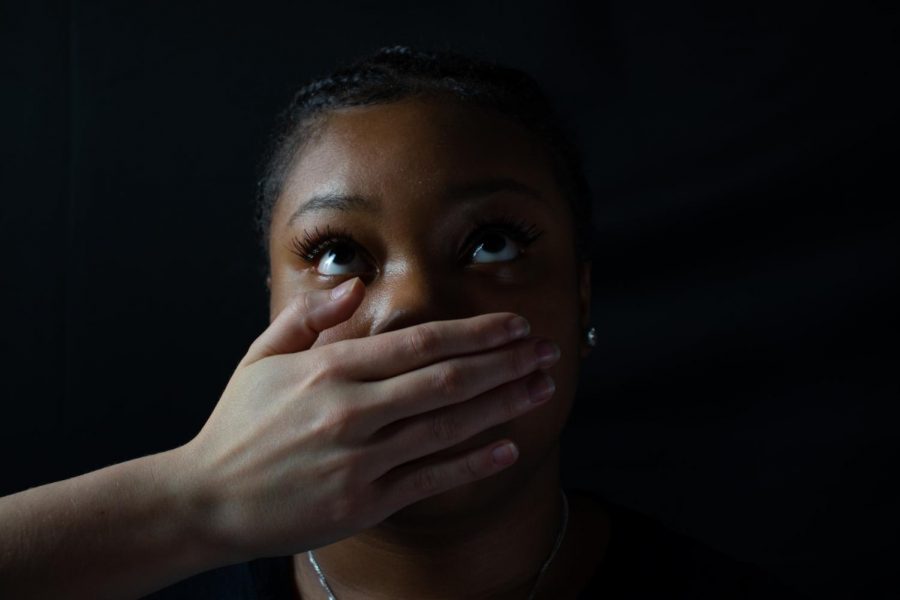 Junior Dariya Jones has a hand over her mouth, trying to cover up her words. In the article, Jones describes what she has the right to say.

This past November, junior Dariya Jones performed a poem at Coffee House, St. George’s annual performing arts showcase. The poem, which she wrote as a monologue for her sophomore English class, sought to describe her life as a black person in America. In it, she referenced losing an uncle to gun violence and how it feels to have white people and fellow classmates claim her culture.

“Yeah, we all have the same rights as the next white person,” Jones recited, “but every single day, we have to fight and go the extra mile just to prove that we are worthy of the same treatment. And until this big race issue is fixed, there is always gonna be problems in this complicated world that we live in, but we all know that ain’t gonna happen, but a girl can dream right?”

The poem itself might not have been all that controversial, had she not used one specific word, a word that is considered historically to be the most damaging: the n-word.

While Jones was presenting her poem, her friend and fellow junior classmate Kirsten Thomas remembered the audience’s reactions as mixed.

“Now, the black people in there completely understood it because it’s their experience every single day,” Thomas said. “So I think we understood it for the most part. [There was] a lot of cheering [and] saying ‘period, yesss.’ That was happening. But it was completely silent around [that time]. I can’t think of during it because I was so into [the poem] myself, but immediately after, I just know that it was a lot of murmuring, like ‘Are we supposed to clap? Can we clap? Should I clap? Was she talking about me? Was she talking about somebody else?’”

Thomas watched people’s reactions as they realized that Jones had used such a derogatory term in her performance.

After the poem was read, the administration requested that the Lodge-hosted livestream of the event be taken down. According to Jones, they also talked to her afterwards.

“I didn’t get in trouble,” Jones said. “They were just trying to see if I was okay, if anybody was messing with me.”

Administrators contacted by the Lodge declined to comment about the incident because the school tries to preserve student privacy.

While Jones said she understands why the school administration reacted the way they did, she wants to emphasize the message of the poem.

“In general, I feel like what I said was powerful, and it resonated with a lot of people,” Jones said. “There was a big message behind it, so it wasn’t all about the curse words. I feel like it was just a great message in general to put out there.”

When asked if she would perform the poem again, Jones was quick to say that she would.

“Yeah, I would,” Jones said. She said she felt that others might want her to be intimidated, but she was determined not to be.

Jones’ use of the n-word touched a nerve because of the word’s long history.

According to PBS, the n-word (with the hard “r”) originated from the French word “negre,” the Spanish and Portuguese word “negro” and the Latin word “niger,” which can all be translated to mean “black.” It was first recorded in 1587 in northern England and Ireland and was likely used as the dialectal pronunciation of the word “negro.”

By the time the word got to the United States in the early 19th century, the n-word was used to replace the first name of slaves as a way to distinguish a slave who might have the same name as a white person in town.

As early as the 17th century, the n-word transformed from “negro” to what we call the n-word and became a derogatory word with a new history of lynchings and beatings.

Ms. Ehi Ike, who is a black St. George’s alumna now living in New York, attends the New School for creative writing. She works as a program instructional supervisor overseeing Title I teachers across the Bronx and Harlem. Ike said she feels the word links the present day to the injustices of the past.

“Historically, generationally, it’s a very painful word,” she said. “So I think hearing anyone who doesn’t have a lineage attached to pain with that word say it isn’t nice to hear. [It’s] a reminder of our country’s history.”

Despite that painful history, variations of the n-word are popular in music, poetry and other forms of art generated by the black community. The hip-hop genre has been a big influence in the changing meaning of the n-word. Rappers such as The Notorious B.I.G. and Tupac Shakur began using the word in their songs, giving it a new meaning.

As one of only three black students to graduate from St. George’s in 2013, Ike remembers students starting to listen more to the hip-hop genre, especially the big influencers of the time, such as Lil Wayne and Kanye West.

“It was ‘08, ‘09. Lil Wayne was really big then,” Ike said. “Drake was coming up. You would notice [white students] would change their conversations around rap because they associated black people with rap.”

Ike remembers having the hard conversations with her classmates debating who could say the n-word.

“I remember even students having conversations on, ‘Oh, why can’t I say the n-word?’” Ike said. “Having to explain that in eighth, [and] ninth grade, I definitely wouldn’t have been able to explain it then.”

But she said she sees things more clearly now as an adult.

“I see now amongst black people, it’s a form of reclaiming power and unifying and creating solidarity amongst our culture,” Ike said. “I don’t know if culture is the right word because, again, there’s so many different forms of blackness and black identity in different cultures amongst black people, but just having that word is a source of safety and comfort and solidarity. But when you hear someone else use it who’s not a part of that community, who doesn’t have that lineage of slavery and segregation and really painful attachments to it, it’s annoying to say the least. And it’s hurtful.”

Jones agrees that the word should only be used by people who have black heritage.

“I feel like no other race has really just been through what we’ve been through,” Jones said. “I feel like why can’t we just have this one thing that’s just for us without anybody trying to take ownership of it? It’s like taking our ownership back. It’s ours.”

The process Jones and Ike described is sometimes called “linguistic reappropriation.” According to Robin Brontsema, a linguist at the University of Colorado at Boulder, linguistic reappropriation is the reclaiming of words or artifacts by a culture that were once used in a derogatory way against the people of the culture. It is a type of semantic change, which means that the meaning of the word or artifact is changed and reclaimed as something in which the culture can take pride.

For Thomas, the n-word has changed to mean something powerful for her culture.

“You’re saying a word that has been reclaimed by people who have been oppressed at one point in their lives, just trying to gain control and power over the negativity that’s been forced on them,” Thomas said. “I think that that’s what the n-word means to me.”

But she acknowledged that not all uses of the n-word are the same. Thomas has only been called that word by another black person, but she still sometimes questions if it is okay even for black people to use if it is still used in a derogatory way.

When the word is used in a negative way, Thomas said she sees a problem.

For Jones, even the exact use of the word, whether it is pronounced with an “r” or an “a” at the end, can change how the word is interpreted.

“If it’s just with the ‘a’ then using it in regular conversation doesn’t make a difference,” she said. “With the ‘r’ it’s kind of like ‘whoa’. It’s a punch in the face.”

When thinking of the n-word today, sometimes it is hard for some to imagine that some people alive even now have lived through the years of being called the n-word in the most derogatory way.

“I feel like it’s different for different generations,” Jones said.“[My grandmother] actually went through being called it in a mean way, and so she might not like that word. And my mom, same thing, but for me, growing up listening to it in music and things like it, it’s just like my environment and stuff that I experience is different from theirs, so now I feel like the word is more of an empowerment and uplifting each other.”

Interim Head of School Mr. Timothy Gibson finds himself on the other side of that generational divide.

“I was called the ‘n’ word for the first time as a five year old by two adult men,” he said. “So that is my frame of reference.”

While he acknowledged that the word is used more commonly now in music and in movies, he still finds it deeply troubling. He also emphasized that the word is completely unacceptable in all its forms in an educational environment and should not be used at St. George’s.

“I find it incredibly offensive,” he said. “It is one of the most offensive words you can use to me and describe another person.”

Mr. Gibson is skeptical that a word can fully be reappropriated, especially one that has such a large history attached with it.

“You can never change a word for everyone, so in some way, shape or form, that word will never change because a word is what it is,” he said.

Many times, people expect one person to speak for everyone, but Mr. Gibson takes a different approach. He emphasizes the importance of hearing everyone’s voice.