Alvin Ailey for All 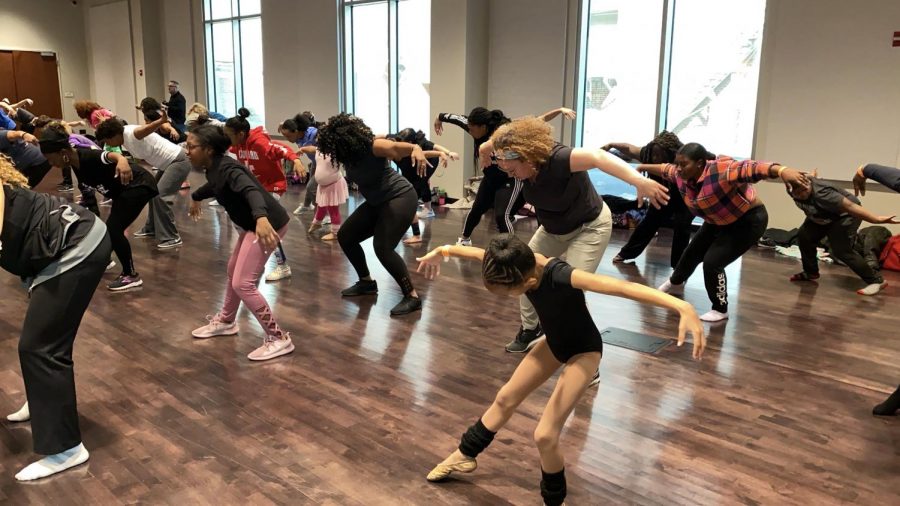 A young ballerina practices the ‘bird arms’ in the “I’ve Been Buked” dance. After gaining some confidence, she made her way to the front row, bringing excited energy with her wherever she went.

‘‘Liberated,” “solemn,” “amazing” and “reverent” these were just four responses that Jeroboam Bozeman received after asking a handful of participants in the sea of people how they felt after learning and performing a section of the famous choreography to “I’ve Been Buked.”

The morning of Feb. 15, about a hundred people of all ages, races and experience levels gathered at the Halloran Centre for Performing Arts and Education in downtown Memphis to learn original Alvin Ailey choreography for “Revelations,” the most widely-seen modern dance performance in the world.

The Alvin Ailey American Dance Theater is a world renowned modern dance company that’s based in New York City. They also have the Ailey School for pre-professional dancers, as well as community outreach programs that offer classes to the public.

Before their afternoon rehearsals in preparation for the night’s show, three of the group’s members Jeroboam Bozeman, Courtney Spears and Yannick Lebrun led one such class for the Memphis community.

According to Alvin Ailey’s official website, “the mission of Alvin Ailey Dance Foundation is to further the pioneering vision of the choreographer, dancer, and cultural leader Alvin Ailey by building an extended cultural community which provides dance performances, training and education, and community programs for all people.”

This integral aspect of the Company’s mission shown through at the class, where they taught African-inspired modern dance.

Bozeman, who’s been a Company member since 2013, took the lead in teaching “I’ve Been Buked,” while Spears and Yannick migrated around the room demonstrating the dance so that even the back row could pick up the masterful choreography.

Local professional dancers and performers danced alongside those who’d never attended a dance class in their life.

Hannah Moore, who’s 14-years- old and has taken dance classes for three years and gymnastics for nine, participated in the free work- shop.

“Before I went to the workshop I didn’t really know much about Alvin Ailey other than some of their movements since we were using [them] as inspiration for our portrayal of ‘Into the Woods’ at Houston High,” Moore said. “But going to a workshop with them really helped out. It was a wonderful experience, and the fact it was free was so cool.

Though the workshop was free, members of the company taught the attendees as if they had paid to be there.

Bozeman, Spears and Lebrun came together at the front of the room to show the class how the dance combination was supposed to look and explained how to use tension and resistance to make the dance’s simple movements powerful.

A phone alarm quietly went off from inside someone’s bag, but no one turned their attention away from the dancers as they demonstrated the impassioned choreography.

As the Company members completed their final reach upward to end the section, everyone clapped and hollered, giving the phone’s owner a moment to turn off their ringer before rejoining the group unphased.

Everyone anxiously waited to get to try the movements out for themselves.

“Walk, walk, walk,” Bozeman said as he led the group.

By taking intricate choreography and breaking it up into terms as simple as walking, both a four-year-old girl and her grandma could learn and enjoy the dance.

“It was cool to see people around me just dancing for [the sake of] dancing, and not worrying about what anyone else thinks,” Moore said.

After giving the community members their turn, Lebrun, who’s been an official member of the Company since 2008 and has undoubtedly done these movements hundreds of times, leapt out of the crouched position he had taken to watch the dance to his feet, enthusiastically applauding the group before joining them for their last run-through of the section.

Next they taught an excerpt from “Procession” and then “Wade in the Water,” a more upbeat song.

Three little girls in the front row clapped to the beat of the soulful song as Bozeman counted “five, six, seven, eight.”

Everyone moved fluidly and created shapes with their upper body that emulated water. Arching and contracting, the students focused on the more intricate choreography. Although this section seemed to be the most challenging for the group to pick up, the joy that Bozeman, Spears and Lebrun radiated while they danced was contagious.

Following “Wade in the Water,” Bozeman announced that they were going to do the dance with fans. While many people

did not know what he was referencing until a couple of minutes later, kids jumped up and down in anticipation.

Spears passed around paper fans as the song “The Day is Past and Gone” played.

After the first group tried it with the music, Spears stopped them. “We have to remember when we are performing that as much as we are dancers, we are people on stage and to not let a dancer or performing too much come over the purpose of us being human,” Spears said.

She continued to set the scene, captivating her audience.

“In this section, it’s hot. We’re in the South. We’re in church. We’re fanning ourselves. We’re not ‘up here,’ Spears explained as she straightened up to an unnatural posture. “We’re just hot, and we’re in our Sunday best. It is our moment to come together and be with the ones in our community. So that’s the energy and the purpose that we’re coming into the sanctuary and it’s a beautiful, hot Sunday morning.”

The group went a second time, this time with soul in their movement, and everyone standing to the side applauded.

Members of the first group traded out, but an older woman wearing a yellow scarf and green peace sign earrings continued to sway to the music and fan herself with an Alvin Ailey program that she’d transformed into a makeshift prop as the next group performed.

Bozeman reminded the final group of the sentiment Spears had shared.

“It’s got to have some meaning to it. There’s a story behind it, right? We’re dancing to Negro spirituals, so it has some weight to it,” Bozeman said. “So when you come in, you gotta really feel it. That’s a part of dance. We’re the Alvin Ailey American Dance Theater. So you gotta put the theater, you gotta put the drama into it.”

That sentiment left a lasting effect on Moore and made the work- shop unique.

“My experience doing Alvin Ailey was very different from other dance workshops,” Moore said. “It wasn’t the turns or jumps you think of when you think of dance, it was so much more.”

Wrapping up the class, everyone came back together to dance for the last time.

Little girls and boys jumped up and down as they discovered a love for dance as an art form. Complete strangers high fived each other.

The company members bowed to the group in thanks for their time and respect.

Although the Company dancers left that weekend to continue their tour, they planted the seed for the love of dance in the Memphis community.

The Alvin Ailey School will be back in Memphis shortly, holding auditions on March 14 at Collage Dance Collective for their Professional and Junior Divisions.