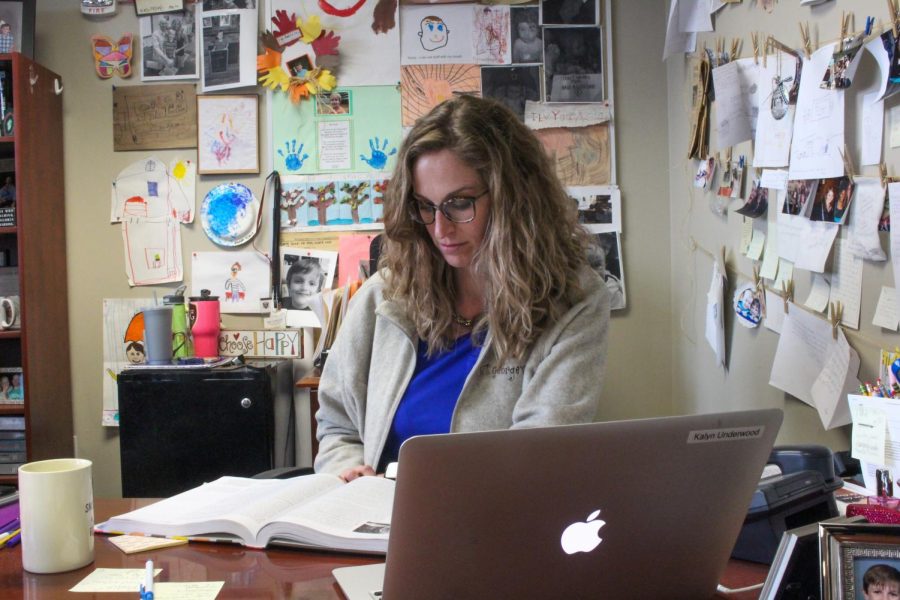 Ms. Underwood sits in her office preparing for her AP Psychology class. Underwood's past position was Dean of Students in the Upper School.

Late in the afternoon of Feb. 26, the St. George’s student body received an email from Head of School Mr. Timothy Gibson with the subject line “Important news.”

The email went on to announce that the current Director of Student Life, Ms. Emmy McClain, had accepted the position of Middle School Director for the upcoming school year. Mr. Gibson also briefly wrote about how current Dean of Students Ms. Kalyn Underwood’s role would be changing. Ms. Underwood will become the Assistant Director of the Middle and Upper Schools.

Ms. McClain will assume the responsibilities that Ms. Pamela McCarthy currently holds in the Middle School.

“I’ll be over predominantly teaching and learning, forming relationships with the families and with students, supporting Deans in their work,” Ms. McClain said. “Typical division director jobs.”

Ms. McClain was excited to have the opportunity to work with students in such a transformative stage in their lives.

“I think there’s so much potential with middle school students. They’re working through their self-discovery and their identity, figuring out who they are,” Ms. McClain said. “I think it’s a really cool time for nurturing adults to be in their lives, and I do think that that’s one of my strengths.”

Ms. McClain also said that both her experience as a parent of a middle schooler and her experience in the lower school makes her a natural fit for the job.

“I think that being a middle school parent and somebody who used to work in the lower school and understands the nurturing piece of what parents need when they’re bringing their kids to middle school and dropping them off for the first time,” Ms. McClain said. “I’m excited to connect with people about that and help them to figure out it’s not so scary.”

The shift is a part of an administrative attempt to create a more cohesive feeling throughout not only the Collierville campus but the Memphis and Germantown campuses as well.

Ms. Underwood’s role for the upcoming year was created to support both Ms. McCarthy, current Head of the Upper School, and Ms. McClain. Ms. Underwood also clarified that she, along with other teachers and faculty, would be helping to take over Ms. McClain’s upper school responsibilities.

Ms. McClain said that the administration is aiming to address the items that don’t fit under the umbrella of her title.

“Some of what I do doesn’t really fit with student life. For example, Yearbook and Media Marketing, those don’t fit at all. So that’s still a conversation we’re having as an administrative team about what makes the most sense, but the whole idea being to maximize people their talents and their strengths in different roles.”

Exactly who will do what is still pending, but there’s work being done toward finalizing the logistics of the transition.

“House system, student government, clubs, yearbook, Gryphgiving,” Ms. Underwood said when asked about which responsibilities could be transferred over during the shift. “I made a whole list yesterday with [Ms. McClain] actually, but those are some of the biggest things.”

As for Ms. Underwood, her shift in title will be less noticeable, as she will continue with many of her current obligations. Some items will have to be transitioned to other faculty members.

“I’ll retain some of the things that I do with my current role. And then there’s just new opportunities that are opening up for other people as well,” Ms. Underwood said. “Now exactly what those are, we haven’t really worked through yet. But even yesterday right after the announcement, Ms. McClain and Ms. McCarthy and I were working together to figure out opportunities.”

Ms. Underwood did say that she will continue to teach anatomy, but will no longer be teaching Advanced Placement Psychology.

“I won’t teach AP Psych, which makes me sad. This is my first year doing it and I’ve learned so much and it’s been really interesting.,” Ms. Underwood said. “I’ll still teach anatomy, just because that’s my bread and butter.”

While the change will likely increase the amount of work Ms. Underwood does, she was not willing to entirely forfeit teaching to accept the new title.

“I just don’t want to leave the classroom,” she said. “That’s my happiest spot of the day is teaching. So that’s important to me to keep that in some form.”