Groove with the St. George’s Chorus

The choir has been flourishing with its new director. 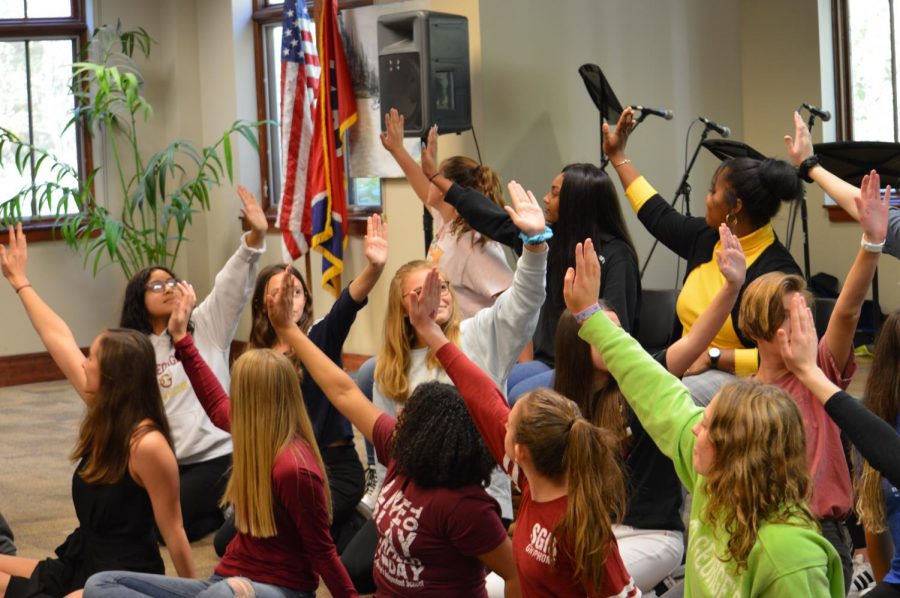 The St. George’s Choir participates in the St. George’s Art Show held on Nov. 9. The chorus members performed a new song in which they used hand gestures for expression.

“[The chorus department has] definitely grown in terms of people and in terms of how we’re doing,” junior Joy Huff said. “I feel like we’ve progressed so much because of Mr. Dumser, and we’re more of a family. Once you come and have that kind of connection, you sing beautiful music together, so I think we’ve definitely grown.”

The Chorus has grown dramatically in size over the past two years, especially with the Middle and Upper school Chorus teacher Mr. Nathan Dumser. He came to St. George’s at the beginning of the 18’-19’ school year.

Huff, who has been in the choir since seventh grade, knows the choir has grown with him as a teacher.

“I think the feedback we get from people makes us grow, and the administration has been telling Mr. Dumser, ‘You’ve saved this program,’” Huff said. “People are coming up to us like, ‘Oh, I want to join choir now.’ And it puts more faith in us that we’ll do better and grow more.”

Senior Jada Hines, who is the Choir President, has also been in the St. George’s choir since seventh grade. She has had four different directors, and she is excited to see so many people wanting to participate this year.

Through the years, Hines has seen the chorus department flourish with twenty or more singers, but she has also participated in a choir of less than ten members. She says that Mr. Dumser helped the choir flourish once again.

“[Mr. Dumser] turned choir on its head, especially last year,” Hines said. “Everyone thought we were so cool, cooler than previous years. He’s done a lot of behind the scenes work throughout the whole program.”

Hines also notices that Mr. Dumser is funny and brings enthusiasm into the choir room, but he also helps people find themselves.

“[Mr. Dumser] pays a lot more attention to you as an individual,” Hines said. “I didn’t even know I was a soprano until last year, and that’s when he started teaching because I’ve always been an alto. He was like, ‘No, you’re definitely a soprano.’ I was like, ‘Dang, I didn’t know that. I wish someone had told me or even bothered to find out.’ I liked that he focused on students more and is not afraid to give constructive criticism.”

Huff agrees with Hines, and says that he really has helped the choir find themselves.

“[Mr. Dumser has] given us really deep talks about who we are as a person, and I think finding who we are as a person helps us connect with others,” Huff said. “I really think he’s challenged us this year with the music, and he’s just focused on making beautiful music. He’s like, ‘When you walk in here, just forget about all your problems, and we’ll sing together and we’ll figure out your problems later.’ And he uses [music] as a therapy.”

Last year, Mr. Dumser had members of the choir write a letter to themselves, and recently, they opened the letter in class. All the members were able to see how much they had improved from last year.

“[The letter] really spoke to me because talking to myself from last year and now, I’ve seen how much I’ve grown,” Huff said. “Mr. Dumser has really helped us grow in that department.”

Junior Hayley Lambert, who has also been in choir since seventh grade, has loved this year’s Chorus Department. She also sees that Mr. Dumser has helped everyone in the choir become closer.

“Now matter how close I am with anyone in the class or how well we know each other, it’s really cool to come together,” Lambert said, “and be able to make music together and share it with everyone at the school.”

Hines said that being able to find their own talent has helped the whole chorus become well-rounded, and she has definitely been able to see everyone improve together.

“For the choir members in general, I’d say they’re actually really hard working,” Hines said. “A lot of them have very mature voices for their age, and they actually stop and look for criticism.”