With the Appointment of the new head coach, Katie Kelsoe, the swim team has entered a new era. Kelsoe was a college swimmer at the University of Alabama, and brings a much younger face to the head of the swim team. 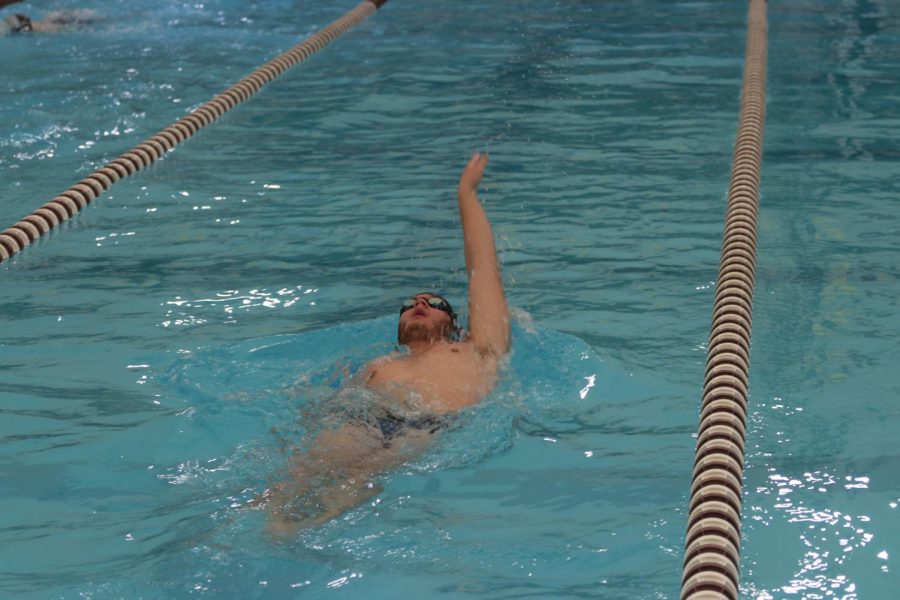 Senior, Luke Stevens, working on backstroke during practice. The team engages in time trials to see how quickly they are improving.

Young but qualified, the St. George’s swim team’s new head coach Katie Kelsoe takes over to drive the team higher.  “I swam for 16 years so it’s kind of weird not swimming for the first time ever, um, it’s pretty easy though since I swam for sixteen years and I’m fresh out of swimming to be able to kind of coach it,” said Kelsoe.

“She is closer to their age which I think is fun. She has great experience from Alabama swimming, as a college athlete, so she is bringing a little bit of a different training technique as well as just an excitement and a kind of renewed energy,” said middle school swim coach, Andrea Ballard. Similar thoughts are shared among the team as well.

“She’s a coach you can actually talk to. She’s fresh out of college, so she still understands kids and teenagers. At practices she’s still a coach but is there to still talk to you like a regular human,” senior swimmer Luke Stevens said.

The high school swim team may be smaller this year than in years past, but the individual talent of the swimmers is still high.

“We definitely will have people going to state but overall due to our smaller numbers, we’re going to do worse than we have in the past because we can’t get as many points with a small group of people,” Stevens said. With a smaller team, it is hard to compete against larger teams with much more players since points are earned by each swimmer on a team.

“I think it is going to go really well, especially towards the end of the year” said Kelsoe when asked about this year’s season.

The team will not be small for long. With more than forty middle school swimmers and the addition of a few freshmen to the team this year, the size of the team will only grow over time. While swimmers on the current high school team are practicing and preparing for state, the middle school swimmers will continue to grow and develop and help varsity swim at St. George’s to increase in size and strength.