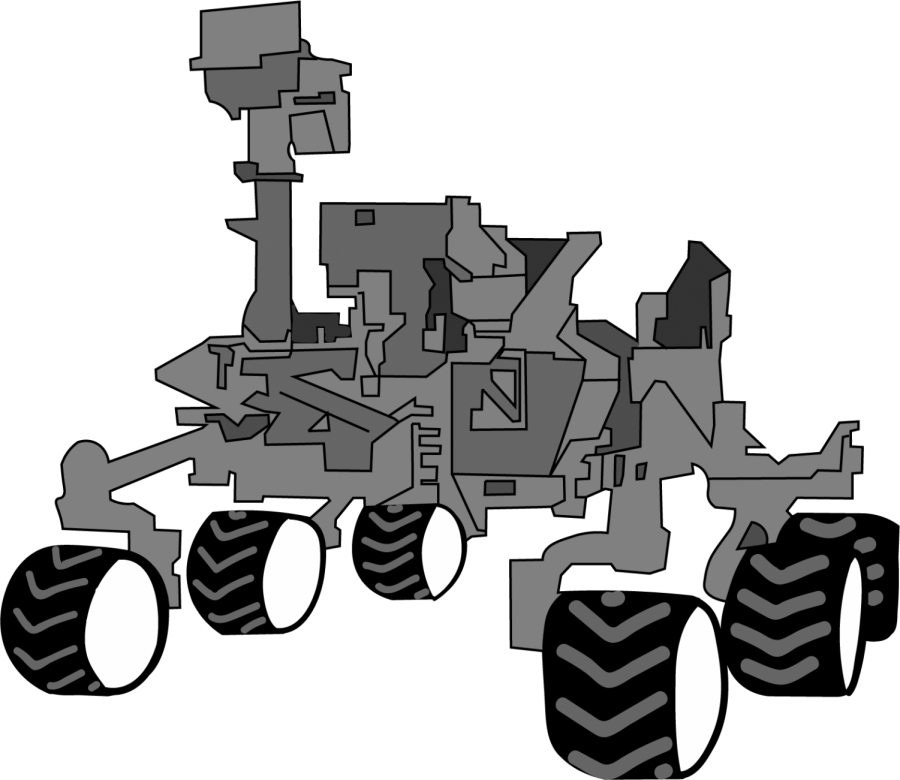 Stylized illustration of the Curiosity rover by Sierra Sellers. The Mars 2020 rover will be nearly identical to Curiosity.

Peter Ilott is the director of the telecommunications section at NASA’s Jet Propulsion Lab (JPL). JPL is the center for development of most NASA probes, from Voyager to the Mars rovers. Peter worked on Spirit and Opportunity, Curiosity, CloudSat, Deep Impact, the Phoenix Mars polar lander, and InSight. He is currently working on the next Mars Rover and the Europa Clipper.

Q. Can you explain briefly what JPL is?

A. JPL is a NASA lab. We’re the only NASA lab where the employees are not civil servants. We’re actually not nasa employees. We’re employees of CalTech, but CalTech has an ongoing mandate from NASA to manage this lab on behalf of NASA, and thats been going on for several decades. We are basically in the business of space exploration, planetary exploration, including earth and remote sensing and instrument development. A lot of stuff that’s needed for advanced spacecraft functioning and development

Q.What have been some of your favorite projects that you’ve worked on.

A. I’ve worked on every mars mission here since 2000 since I jumped out off the commercial side of the business and to this side. So MER (Mars Exploration Rover) was amazing. We landed Spirit and Opportunity on Mars both successfully within a month of each other back in January 04. I worked on an Earth mission – CloudSat. Deep Impact was a lot of fun. It was a mission where we crashed a projectile into a comet back in 2004. I was there in the control room listening to the radios. I worked on MSL, Mars Science Lab, the Curiosity Rover. That’s still alive and going on mars. That was a lot of fun. And now we’re building the next Mars rover which is superficially a clone of Mars Science Lab. I worked on Phoenix, the Mars polar lander. I worked on InSight which is alive right now on Mars, and I’ve been working a lot on the Europa Clipper mission which is a big Jupiter mission which launches in 2023.

Q. Would you be able to go a little bit more in-depth on your current projects? 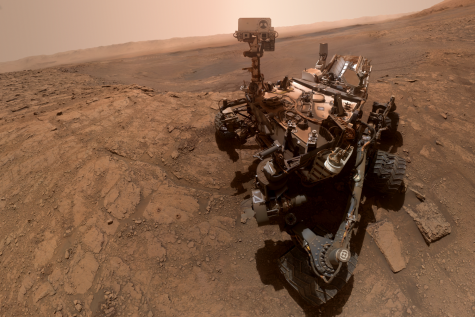 Selfie taken by the Curiosity rover in October 2019. Image courtesy of NASA.

A. We’re building the next Mars rover which is called “Mars 2020.”  It doesn’t have an official name yet, although there’s a contest out now to name it, which students can put in. So if you can go online, you can find somewhere where you can propose a name (the contest is closed. The name will be announced in February). That’s a lot of fun, it lands on February 18 2021. It’s like sending a geologist and a geology lab to another planet. The geologist is the robot itself talking to the geologists here, and the lab basically goes along with the rover. There’s a suite of instruments and cameras. There’s also a sample return aspect of this mission. We’re gonna grab some samples and cache them on the surface, and in 2027 we hope to go with a lander and pick those samples up and bring them back to Earth. So there’s a long-term aspect to this mission as well.

Q. And will that second lander also be automated?

A. Well yeah, it’ll also be a robot. They’re all automated, but they’re still controlled from the Earth. We send commands up every day and get data back every day, so that’s pretty much it.

Q. Could you talk some about InSight’s struggles?

A. Yes. Well they had some trouble with the seismometer, which is the primary instrument. We landed in November last year, and there wasn’t much point in launching in 2016 (when it was planned to launch) because the instrument wasn’t working. I don’t remember the details anymore, but they got those problems ironed out and we launched in 2018 and landed in November 2018. The seismometer 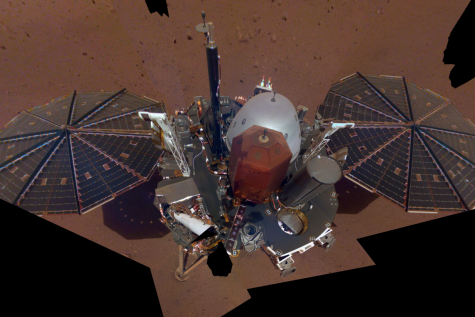 A selfie taken by insight in December 2018. Courtesy of NASA.

Q. And the temperature probe problems?

A. Yes, the, well it got stuck. This same stuff happened on Apollo because they did similar drilling on Apollo. It happened a couple times, they got that drill down and it got stuck. They couldn’t go any deeper and they couldn’t pull it out. They actually recovered then. They took a little extra time and they actually managed to get them out. So they’re working on retracting this thing (on Mars) and trying to put it down in a new spot so it can drill its way down and try to get the proper temperature vs depth data. So it’s in process right now. I happen to know some of the guys working on it.

Q. Recently NASA has released plans for the Lunar Gateway (space station staging area for future moon landings mandated by the president). Is that going to mean anything for JPL?

A. JPL is always involved in these things one way or another, either through communications or with instruments or navigation. JPL is one of the prime navigation centers for space missions for NASA and the world. You know, other organizations like ESA use us as well. Our navigation people know how to do it, and our Deep Space Network is very much involved in all these things, so there’s gonna be aspects that we’re involved with. That we already are involved with.

Q. Can you explain what the Deep Space Network is?

The 70m (230ft) dish at Goldstone, Calif., which is a part of the Deep Space Network. Image courtesy of NASA.

A. It’s this set of three complexes around the world – one in Madrid, one here in the desert in Goldstone, near Barstow and one in Canberra, Australia. There are several deep space stations at each one of these network complexes and they’re used to communicate with spacecraft around the solar system and outside the solar system, if you count Voyagers as being outside the solar system. They’re outside the heliosphere (area where the sun is the primary source of radiation) anyway. And positioning these three locations around the earth means we can always have a station looking at some object out in space. there are other stations around the world, but the Deep Space Network is the most famous and probably the most capable.

Q. In your time here, what would you say has been one of the most interesting things to happen?

A. Landing several spacecraft on mars. As I mentioned before, crashing a big chunk of copper into a comet and seeing this huge plume come out. Problems that came up that we’ve found solutions to or we didn’t expect and then went “well that’s pretty interesting. Look at that physics.” There’s so many things it’s hard to pick and choose. Certainly working on the Jupiter mission has been thrilling. I’ve never worked on a Jupiter mission. There was the Juno mission while I was here, but I didn’t really work on that, and it’s fun to know that I’m going to Jupiter now. We saw the big station fire which was back here in September of ten years ago, which was right behind the lab. To see those hills behind us on fire, that was pretty interesting. We actually didn’t come into work for a couple days. That’s pretty interesting. We have animals on the lab here. We have sheep and deer and the occasional cougar is sighted. That’s pretty interesting. So it’s a fun place to be. You kinda walk into work in the morning and feel like you’re coming to a university campus. And in one way it is, but it’s so much more in so many ways.

Q. How would you convince someone who isn’t invested in spaceflight that JPL is an important place?

A. We do fundamental research. We’re not in the business of building communications systems or satellites except at the very beginning when nobody’s done anything like that before. So we only really develop stuff that nobody else has really done before. If it gets to the point where it’s routine, we get out of the business. So by doing a lot of fundamental research we enhance and expand technology and science. The stuff that we do contributes to basic scientific knowledge which is invaluable to understanding our position in the universe and why certain things are important. We survey the earth and other planets to understand better where our planet came from and how it developed and how other planets relate to us. It’s all fundamental and it’s all invaluable.

Q. When you were a younger person in college, what sparked your interest in space?

A. I was always into science and space, and when I went to college, I did physics. Actually in my first job after I got my PhD, my job title was actually “applied physicist.” I was at a company that developed instruments for measuring temperatures inside kilns. But then I ended up working for an aerospace company in Montreal. So I worked on the commercial side for eleven or twelve years. I ended up at Hughes Space and Com here in California, and then I came up here to JPL and got out of the commercial side. That was nineteen years ago. So I just got into the business because I was in science and technology. I did physics bachelors, physics masters and electrical engineering for my PhD. I was already involved in things that are related to space exploration, telecommunications, stuff like that. From there I just kept going up and doing other stuff. It’s nice to have a broad spectrum education. I would certainly recommend going into physics if you want to get into the business, but make sure you keep your hands in engineering as well. Or you can do the other way around. Do engineering but keep your hands in physics.

Q. Can you explain a bit why telecoms is important, why it’s challenging and why there has to be like a whole department for it.

A. Department? Section, division even. I’ll give you one number. The signal that we pick up from Mars, Jupiter, Saturn is typically in the watt range. Ten watts, fifteen, twenty watts. And we can only put two, three, four meter antennas – four for Cassini (the biggest interplanetary probe ever) – on spacecraft. So the signal levels that we receive on the ground, even using a seventy meter dish, seventy meter dish, are very weak. And I’ll tell you a typical number: we can pick up signals here on the ground at data rates which are very hard to find receivers for these days because nobody on the ground builds radios that work at 2 kilobits per second (Kbps). At 2 Kbps, or even 125 bits per second, we can pick up signals that are on the order of -140 decibel-milliwatts. That is 14 orders of magnitude below a milliwatt. So basically a hundredth of a femtowatt. And we have to be able to reliably pick that signal up, because otherwise we don’t know what the spacecraft’s doing. And we have to send signals at similar levels. We have a lot of power at this end, we have 20 kilowatt transmitters, big huge dishes. But still, we end up having signals at the spacecraft in the femtowatt, tenth of femtowatt, hundredth of femtowatt range. It’s a challenging field. On the ground, no one tries to pick up femtowatt signals, so we have to worry about noise. That’s one of the reasons it’s important. Plus we also are involved in remote sensing. I’m the chair of some reviews for this instrument – the REASON instrument on the Europa Clipper – which is going to fly by Europa 51 times. Every time we fly by we’re gonna put radar and take pictures to try to figure out if there’s an ocean on Europa. And it’s all telecom problems.