It is Our Turn

Hear from a Freedom Rider who influenced my passion of activism 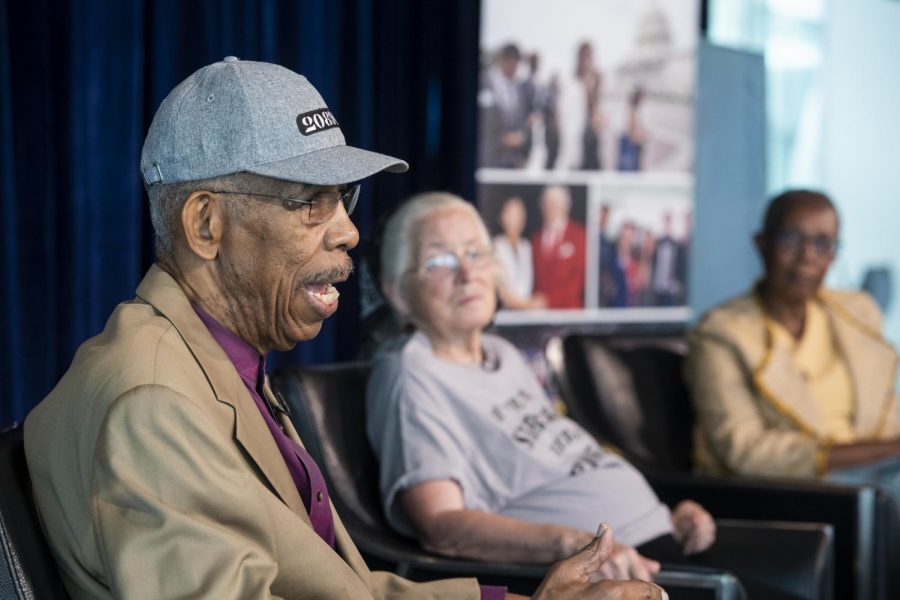 Courtesy of the Freedom Forum Institute

Dr. Ernest RIP Patton speaks at the Al Neuharth Free Spirit Conference in the summer '19. He talked about being a freedom rider in the 1960s.

“[The guards would say,] ‘If you don’t stop that singing, we’re gonna take your mattress away from you.’ So they opened the door, we threw our mattresses out in the hallway,” freedom rider Dr. Ernest Rip Patton said.

This is just one of the many examples of the bad conditions freedom riders experienced during the 1960s. When guards tried to take away the mattresses of freedom riders, Dr. Patton and others would sing.

I had the privilege of meeting civil rights activist, Dr. Patton, this summer while I was at the Al Neuharth Free Spirit Conference in Washington D.C. Freedom riders were nonviolent protesters of the segregation of bus terminals and of the Jim Crow laws in the South.

In 1960, the courts passed a law saying segregation in transportation facilities was unconstitutional, and the freedom riders tested out if the southern states were abiding by the law. For months, nonviolent participants built up their strength and adapted to stay calm when they were being threatened or beaten.

Dr. Ernest Rip Patton was one of these freedom riders, and by the time he was 23, he had participated in over 50 sit-ins and protests. He attended Tennessee State University and was a drum major in the marching band.

In May 1961, he was on the greyhound bus going to Jackson, Mississippi. He was arrested in Mississippi and taken to the state prison farm. He was one of fourteen other Tennessee State University students to be arrested for participating in the freedom rides, and after he got out of jail, he worked as a jazz musician and a community leader.

Dr. Patton was taken to the penitentiary in Parchman, Mississippi, where the freedom riders  were kept separate to make it harder for them to communicate with one another, but they found another way.

“Music is very important because when we were in Parchman, the way that we communicated was through music,” Dr. Patton said. “Certain times of the day, we would go up against the wall, not knowing who was on the other side, and we would sing to the wall. And we would stop and listen.”

Singing was how they were able to check up on each other throughout the day.

Dr. Patton and other freedom riders were victim to violence every day because they wanted to be treated equally. They were beaten, spat on, and screamed at because they were fighting for their right to sit wherever they wanted in public places.

Hearing the stories that Dr. Patton told about what it was like fighting for his rights in the 1960s made me want to write down what a cruel, segregated world Black people had to endure just for being themselves. I am inspired to write and document what people must go through everyday just by being them.

The most motivating part of Dr. Patton’s speech was why he decided to become an activist. It’s up to us to change the world, and when I heard his story, I knew it was important to write how segregated Nashville was in the past and how a group of activists came together to change a whole city, even when it took years to accomplish.

Dr. Patton knew he wanted to be an activist since he was a little boy and his white friend told him to go to a movie theater that had served hotdogs and popcorn and had brand new cushioned seating.

“[My friend] comes back [from the theater]. He’s excited. He’s telling me about what he has seen, ‘Oh, man tell your mom to take you.’ It wasn’t about the movie,” Dr. Patton said. “It was about the comfort and the smells. ‘Tell your mom to take you to the movie, to the Loews Theater.’ And I did that, and of course, in the colored family or the negro family, they’ll tell you, ‘Okay, we’re going to eat here at home first because you can’t eat at the theater.’ I didn’t know the difference.”

Dr. Ernest and his family headed to the theater. It was his first time at a movie theater.

“We’re crossing the street. I’m going this way because my friend said to go in this door. My mother takes me by my left hand, says, ‘We can’t go in that way.’ And I looked up at her, and I said, ‘But my friend said!’ And I stopped right there.”

She had given him a look, and he knew he shouldn’t ask any more questions. He did as he was told by his mother, but he knew he was not going to be treated with equality when he walked in the theater.

“We had to go down that dark alley, pay, and go all the way up to the balcony. The seats weren’t too comfortable. But I did not experience what my white friend experienced, what he told me I would experience,” Dr. Patton said, “so I always look at that as planting a bud in the fog so it will come up in the spring. I never forgot that, so when I heard about the non violent training, I went to the non violent training. And my mother said, ‘I knew that you were going to join that movement because you could not go in the front doors of the theater.’”

A journalist’s duty is to document the truth by any means necessary, and I find that to be the most important job. The stories of many freedom riders and civil rights activists are getting lost to history, and it is a journalist’s job to document their experience. The Civil Rights Movement may have happened in the 1960s, but people today are still inspired by what they did.

The fight for all human rights has continued today, and we must fight, just as people fought before us. The Civil Rights era in history textbooks may date to the 60s, but the fighting never stopped.