Spending hours staring at a screen? It’s time to ask the question: is technology a hazard to society or bringing people together? 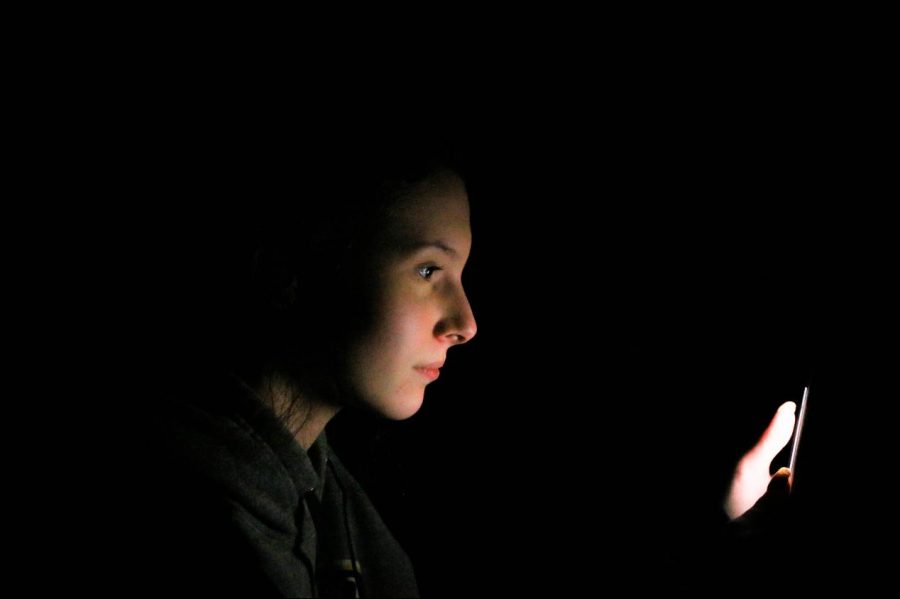 Sophomore Madeline Sisk poses for a photograph while scrolling through Snapchat on her phone. Forty-five percent of teens say they use social media “almost constantly.”

“I was kind of slacking off in my classwork,” senior Silas Rhodes said. “I mean obviously Snapchat was something like two hours a day, but Instagram, when I got that, I spent like three hours or so. It was just ridiculous.”

Rhodes is not the only teenager who felt that the introduction to social media took over their free time. According to a 2018 teens, social media and technology survey done by Pew Research Center, 95% of teens have access to smartphones, and 45%of those teens say that they use social media “almost constantly.”

At the beginning, Rhodes felt the pressure of trying to stay connected with people through social media because it seemed like that was where everyone was.

Indeed, many young people use social media to connect with their peers. Eighty-one percent of teens said they feel more connected through social media. Sixty-nine percent of people say that they feel like they’ve been able to interact with more diverse groups of people, and 68% percent say they found people who helped them through times of need, according to the Pew Research Center.

But Rhodes said that getting away from social media was a great decision for him.

“You just kind of feel kind of different, but then again, I wouldn’t give it up, you know? I’m fine with being a little bit outside if it makes me do well in academics,” Rhodes said, “and because I have a plan, there’s a purpose for why I’m doing everything I’m doing, I’m fine with it. And it  doesn’t make me depressed or anything, which is, I think, the main reason I’m fine with it.”

Overall, Rhodes said he is glad he made the decision to disconnect.

“I absolutely feel happier,” Rhodes said. “I don’t compare myself [to others] anymore.

Social media makes those kinds of comparisons easy and can make teens feel competitive with one another.

Another 2018 survey done by the Pew Research Center about teens social media habits and experiences reports that 43% of teens who were surveyed said that they feel pressure to only post what they think will make them look good. Forty-five percent say that they were feeling overwhelmed by the drama of social media, and 37% say that they are concerned with getting a certain number of likes and comments on their posts.

“I’m noticing that a lot of kids are really concerned about their whole appearance on the internet, especially social media,” Ms. Lewis said. “There’s a lot of girls especially that worry about how they look, and so they will alter some of the images before they post them.”

“I am not a fan of social media,” Stoddard said. “Social media makes me feel excluded, more so than included, and often makes me regret my decisions.”

Although Stoddard is not a fan of social media, he does feel more sense of community in gaming, which is why he prefers it.

“[Gaming is] an easy subject to talk about, I think, for the most part, especially for guys,” Stoddard said. “I think it’s definitely a very inclusive platform, just because everybody can come together and play their favorite game. It’s just a blast most of the time.”

Stoddard isn’t alone in feeling the connections that can come from gaming. According to a 2015 teens, technology and friendship survey by Pew Research Center, 78% of teen gamers say that when they play games with their friends, they feel more connected to them.

However, it’s not just teens who make connections through online gaming. Upper School math teacher Mr. William Whipple said that he even met some people through gaming, who he was later able to connect with in real life.

“There was someone who lived in my town, I never knew him, he was four years older than me, so we never met in school,” Mr. Whipple said. “When he was a senior, I was a freshman, so I never really knew him. But he and I have become very close friends. He was at my wedding. And that came through gaming.”

Because the gaming community is so broad, Mr. Whipple said that it was easy for him to make connections with many different people.

“I think there’s a community in gaming,” Mr. Whipple said. “A really unique community in gaming, where a lot of people who come from different backgrounds, whether that’s boys, girls, black,white, whatever. There are people all across this world who play video games and can find something  they can bond over, and I think that’s unique.”

Gaming is far from an egalitarian utopia, however. The prejudices that exist in the outside world can enter the world of gaming as well.

Senior Natalie Murrah has been a gamer for her whole life. She was introduced as a kid and has played video games such as “Borderlands 2,” “Dishonored,” “Mark of the Ninja,” “Dead Cells” and “Hollow Knight.” Playing for so long, Murrah has encountered and heard of the harassment of the gaming community.

“There’s this stereotype that female gamers will primarily play support roles , and I have seen times where people try and push me towards being in a support role instead of a tank [fighting] role ora D.P.S [a character that heals others]. But it’s never been something extremely blatant for me,” senior Natalie Murrah said. “I have heard different stories from other people I know, though, of them – it’s usually often in shooter games, that the moment they use their voice chat for instance. Voice chat is sometimes seen as a little bit risky for girls because the moment a guy – or sometimes a girl – hear that female voice they are already jumping to conclusions, and I’ve heard of regular harassment and sexual harassment.”

Based on a 2014 online harassment survey by Pew Research study, 26% of women asked reported that they have been stalked because they were active online, while only seven percent of men reported the same. 25% of women reported being sexually harassed, compared to 13% of men.

The 2014 GamerGate Scandal made it clear the degree to which women were vulnerable online, when online debate regarding sexism in video games resulted in many female gamers falling victim to harassment, having their personal information made public and being threatened with physical violence by frustrated individuals who disagree with changing gaming culture.

Murrah, however, thinks that the harassment is not just evident for girls trying to play videogames, but it also is seen even when men play.

“Within the gaming world, harassment is common. And while there is definitely sexual harassment directed towards female gamers, I think harassment in general has been a problem for everyone,” Murrah said. “If you pay attention to how some male-to-male interactions go within the gaming community, they can be extremely hostile towards each other or whole sections of the team will gang up on one person, blaming them for everything and starting to get into personal insults. So while I do think that there are some sex-based issues when it comes to girls in the gaming world, I feel like harassment as a whole has been pretty universal, just the subject matter changes.”

Murrah does see how video games can be isolating for people in these situations, but she still loves to play. She says that it can even be beneficial because sometimes it is easier to connect with people when their physical features like race and gender do not pose the barriers that they may in other face-to-face situations.

“The interesting thing about video games is that you, at first, you never see that other person’s face,” Murrah said, “You can’t see their race. You don’t know what their sex is, what their creeds are. All you see is their gamer tag and what they choose to play as, and then you hear and see the personality through their voice or through text chats and such. And while, of course, that anonymity can lead people to be more harsh towards each other, it also keeps you from making any preemptive judgements about that person. I think it’s a great way to bring people together.”

Bringing people together is what senior Caleb Lindow has in mind for his new “Gamer Club,” which has just found a sponsor, Mr. Julien Vincent. The purpose, according to Lindow, is to get people of all ages to come together to play video games. Some people play video games but feel like they don’t have people to talk to about their games, and Lindow said he wants them to have connections with people who feel the same way.

“I think the biggest problem that people who play video games face is trying to connect with someone because not everyone wants to sit and talk about it because if I’m at lunch, I’m not going to be like ‘oh, I played this sick game last night.’ And someone’s going to be like ‘oh, played that game too,’” Lindow said. “I’ve already seen that happening a lot [with the club]. I’ve played with a ninth-grader playing “[Super] Smash [Bros.]”. I didn’t even know who he was, but he was like, ‘Hey, I heard you play “Smash.” Do you want to play?’ And so it’s trying to harbor those connections between grades.”

Lindow also wants to stress in his club the healthy amount of time someone should spend trying to play video games or improve their skills.

“I think it is important to stress healthy amounts of playing because frankly – and the same thing with sports too, like if you practice for like 10 hours a day, you’re going to hate it eventually,” Lindow said. “That’s super unhealthy. Not in the same way that gaming would be unhealthy for you, but emotionally that’s not healthy.”

Stoddard agrees that when it comes to spending time online, moderation is key.

“You know, choosing social media and playing video games should be done in moderation, so just don’t let it be the only thing that you do, you know?” Stoddard said, “You still have to study and do homework, as boring as it is.”