Student artists collaborate on a live painting at the art show

Sophomore Caroline Higley works with her group to paint a sunset at the Art Show on Nov 7. Two groups of students formed to work on the live art painting.

The St. George’s walls were lined with professional artwork for the annual art show on Nov. 9, and as patrons strolled through the hallways, they passed student artists collaborating on large paintings in real time.

Sophomore Caroline Higley was one of the student artists that participated in the live painting display.

“It was a lot of fun. It was cool to have people walking by, so they could come back and see how we were doing,” Higley said. “It was also fun to be working with my friends and people that I’d never met before.”

Mr. Danny Broadway, Artist in Residence and art teacher for the Middle and Upper School, was responsible for bringing the project together. 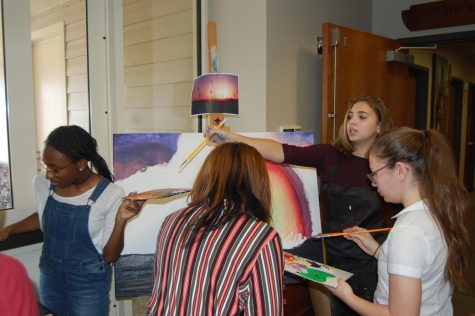 Photo: Snowden FarnsworthFreshman Kate Winstead reaches to dip her brush in the shared pallet. The students used many pallets and mixed each other’s colors.

“I just wanted to show the community of St. George’s that we have talented art students that can produce high quality works of art and that their support can foster more opportunities for them to learn other art making techniques,” Mr. Broadway said.

“I like to work collaboratively sometimes,” Mr. Broadway said. “I think that students gain a sense of process and can learn from each other as they create.”

The students got to choose from an assortment of Apple computer backgrounds.

“[Mr. Broadway] brought four pictures and told us we could choose two and let the other group choose first,” Sophomore Chloe Lewis said. “We had upperclassmen in my group, and there was a group of freshmen so we let them choose first.”

“That was my first time doing it, but I created a plan in the beginning and then we just went off of that plan,” Lewis said. “We didn’t have any issues with that. We did all have different art styles, but we did work really well together. “

Because the students were working in groups, every person brought their own unique style. 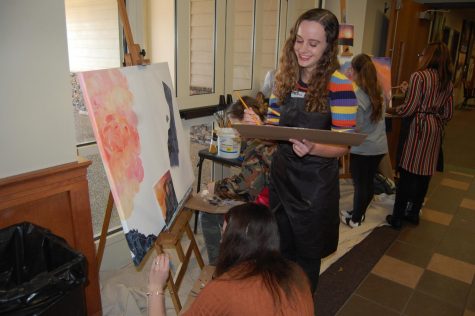 “We didn’t really think about how different it was going to look because we had the picture and were like ‘okay it’s got to look like this picture.’ So then we just kind of separated into different corners,” Lewis said. “I had the top left with the sky. I just did a very abstract sky with the colors that were there. Madeline [Sisk] attacked the canvas with a pallet knife and Natalie [Murrah] did her detail work in the bottom left. We just kind of got to the point where we were starting to work together, and all three of us were working on one spot at one time when we got towards the end.”

“We started off all doing our own different styles in different spots,” Higley said, “and I think it came together to look pretty cool in the end.“

Despite their hard work, neither group was able to finish the 2-by-5 foot painting because of the time constraints of the day.

“I think that [the day] was successful,” Mr. Broadway said. “I would have them work faster so that they can actually finish the painting that day.”

Higley agrees that the day was successful because of what they were able to learn.

“I think it was more important in the end for us to have had the experience of working together than to have a finished product.”