The second half of the season has commenced, and there was no shortage of entertaining matchups. Here is the rundown of the important things that transpired in week 9: 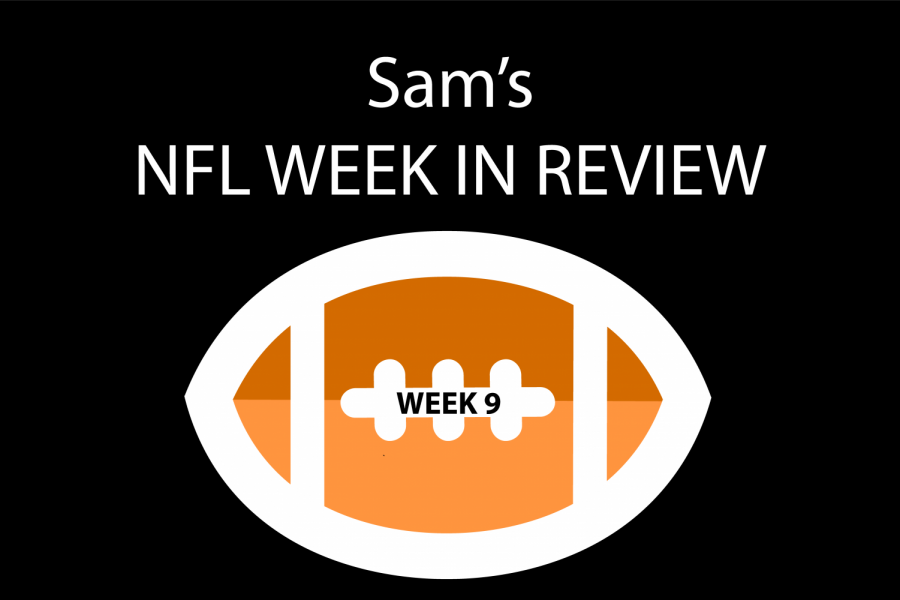 And the 49ers win streak continues. In a spooky game on Halloween night, the San Fran passing game finally came alive, with Jimmy Garoppolo scoring four times through the air for over 300 yards. The Cardinals put up a valiant fight behind Kyler Murray’s 2 touchdowns and Kenyan Drake’s impressive debut performance in an Arizona Jersey (110 yards and 1 touchdown). However, newcomer Emanuel Sanders helped San Francisco’s offense dash any hope of a Cardinals victory with 112 yards and a score in his 49ers debut after being traded from the Denver Broncos. The 49ers will be tested next week against the Seattle Seahawks as they try to keep their perfect season alive. The Cardinals have a chance at redemption next week against an inconsistent Buccaneers team.

This game did not go the way I thought it would, nor did it go the way the Jaguars had hoped it would against one of their rivals in the AFC south. The Texans controlled this game all the way through, gashing the Jags defense through the air and on the ground. Deshaun Watson continues to solidify himself as one of the game’s premier young quarterbacks, and with Carlos Hyde running for a whopping 160 yards and what would have been a long touchdown would he have not fumbled, the Jaguars didn’t stand a chance under the Texan onslaught. A match against the Baltimore Ravens looms for Houston, while the Jaguars play their second straight division rival in the Indianapolis Colts after their bye week.

Things got interesting quickly in what turned out to be a very back and forth game that ended on a missed field goal by Colts kicker Adam Vinatieri. With Jacoby Brissett leaving the field early with an apparent knee issue, Brian Hoyer was put in under center and put up a good fight with three touchdowns, but the Colts fell under a barrage of Chris Boswell field goals and a pick six by Minkah Fitzpatrick. The Colts should have an easier time against the Miami Dolphins who actually just won their first game against the Jets. Meanwhile, the Steelers are set to play the Rams in what should be a huge test for Mason Rudolph and the Steeler offense.

“Want to see a magic trick! I can make the Packers offense disappear! Observe… and poof! It’s gone!”- Chargers defense, 11/3/19. That’s right. The same Packers offense that has been so good recently seemed to disappear into thin air. With only three points going into the fourth quarter, the Chargers finally looked like the team that made a playoff run last season. As for the Packers, next week will have to be better against the Carolina Panthers. If the Chargers can win against the Raiders next week, they will have appeared to finally have broken out of the slump that has plagued them thus far this season.

The offensive woes for the Bears continue. The passing attack for Chicago was almost nonexistent, with both their scores coming from running back David Montgomery. The Eagles were much more balanced, with Carson Wentz and Jordan Howard leading the way for a Philly victory. The Bears have looked thoroughly unimpressive the past four weeks, with each game ending in a loss. They have a chance to change that Sunday against the Detroit Lions in a divisional game. The Eagles on the other hand have a bye week they can head into feeling good.

Who would have thought that the Chiefs could beat the 6-2 Vikings with their backup quarterback? Don’t include me in that list. That’s exactly what happened though, with Harrison Butker knocking 4 field goals in including the game winner, along with two explosive touchdown plays from Damien Williams and Tyreek Hill. Whether the Chiefs get Mahomes back next week or not remains unclear, but they may not need him against a struggling Titans team. While the Vikings didn’t win, its encouraging to see that Kirk Cousins and the passing game are still there when the Vikings need them, with Cousins throwing three scores. The Vikings play the Cowboys next week.

Boy oh boy. The Titans offensive struggles resurfaced as they were able to put up points, but not enough to keep the game a contest. Christian McCaffrey continues to put up incredible numbers, scoring three times this game. The future looks bright for him, but he will be tested by a Packers team that suffered an embarrassing loss, but still possess one of the NFL’s best records. The Titans hope to find the solution to their problems and quickly, as they play a Chiefs team that might get its young superstar Patrick Mahomes back.

What a game this was. Russell Wilson turned in a 5 touchdown, MVP level performance as the Seahawks hung on to win in overtime on a scoring pass to Jacob Hollister. Tyler Lockett of the Seahawks and Mike Evans of the Buccaneers had an epic receiver duel, with Evans racking up 180 yards and a score while Lockett compiled 152 yards and two scores. I really have enjoyed these shootout games that pop up here and there during the season. The Tampa Bay Buccaneers can put up a lot of points when they aren’t turning the ball over every second, and they showed that here, though it didn’t translate to the win column. It is my opinion that if the Bucs can obtain a new quarterback who has the same big arm as Winston but doesn’t turn the ball over as much, they can be one of the NFL’s highest scoring offenses. They will have an easier time against the Arizona Cardinals next week who don’t have as strong of a defense as Seattle. Meanwhile, the ultra-efficient Seahawks offense faces the undefeated San Francisco 49ers.

In a clash of AFC giants, Lamar Jackson and the Baltimore Ravens upended the previously undefeated Patriots. The seemingly unstoppable Patriots defense seemed baffled by Lamar Jackson’s quick arm and ability to speedily scramble and extend plays and was utterly unable to contain him. Mark Ingram added a threat on the ground with 115 yards and the Ravens offense seemed to show off its versatility once again. The Patriots head into their bye week with one of the NFL’s best records but some questions to answer while the Ravens hope to improve their record against the winless Cincinnati Bengals.