Reasons why the junior class decided to all go blond 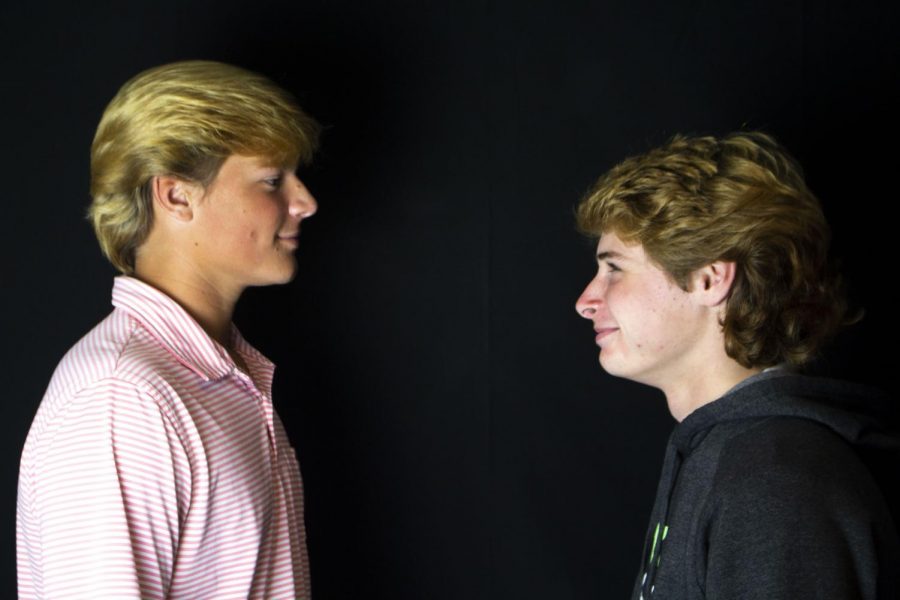 Juniors Sam Stamps and Jake Brantley pose to show off their bleached hair. This year, some of the junior boys decided during the summer to make this change.

I know you all have seen the bleached boys this year and wondered why and how. Believe it or not, it all started at church camp.

At the end of summer 2019, a group of junior boys came to a mutual agreement to dye their hair bleached blond, and the guy that started it all was Carter Shaw.

“I decided to bleach my hair because I was at church camp in California and Carter Shaw had an idea of bleaching his hair,” junior Ethan Payne said, “and then we all just kind of jumped on the bandwagon of it.”

As all the boys went to junior Jake Brantley’s house, Brantley’s mom came up with a box solution for bleaching all the boys hair. But, when bleaching their hair, the color came out a light brown instead of blonde, so they all were disappointed and decided to tried again on their own time.

“I had my mom do it and it got to, like, an orange color,” Payne said, “so then a week later I had Hanna Gilmore doing my hair, and it got to about this blond color. It’s still a little orange, but it’s what your gonna get for a spending 40 bucks instead of 150 bucks.”

Payne recaps his Citizenship trip as he specifically remembers a cute little girl singing a peanut butter jelly song, and her calling him peanut butter head because of his hair color.

When we had a half house day, we had different events going on, and Payne expressed how in multiple cases people would confuse him for junior Bo Thrasher, and vise versa.

Although it may seem hard to distinguish the boys, most of their classmates don’t find it difficult.

“I’ve been with them so long, and I recognize them now,” junior Alicia Hardrick said. “If I was new or something I would confuse them.”

Teachers have many opinions on the bleach fad as well. When asked if the bleached hair caused identity confusion, Upper School teacher Mrs. Emily Metz said that she “…did in the beginning, but now I know who they are. It’s less confusing now, but the first couple days of school, I had no idea who anyone was.”

As for the appeal of bleached hair, Metz was definitely not a fan. “It’s just a bad bleach, it’s not a good look.” However, Metz did acknowledge that it was a home job, and the results could have been different if it was professionally done. “If it had been done with great skill, I might feel differently.”

The creativity of the class of 2021 has become the talk of the school year and hasn’t died just yet. The bleached boys have taken over, and they’re not done. Do they keep the blond or switch it up? Stay tuned for what they do next.