It’s Okay to be Different

Fourth and fifth graders participate in the Glowing Gryphon Pageant 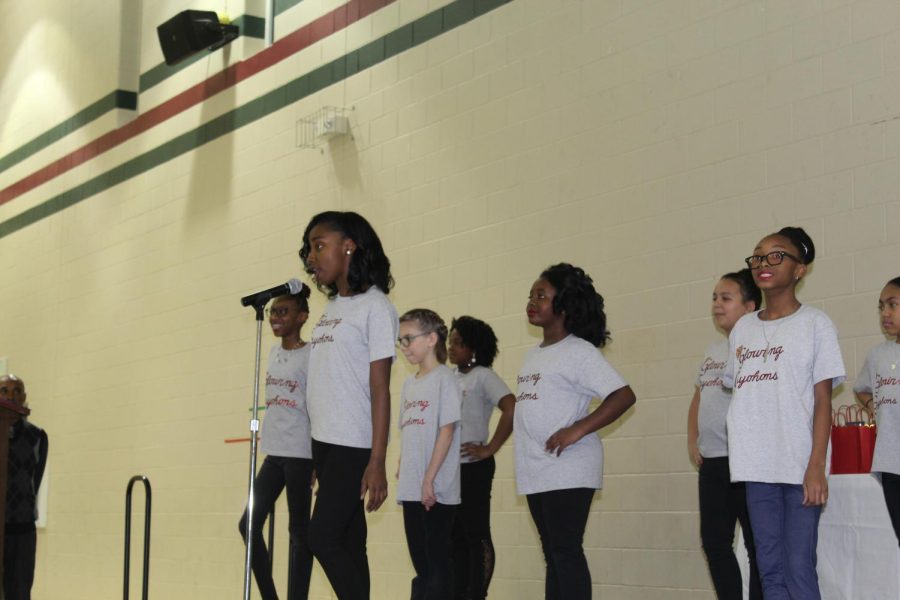 The Glowing Gryphon Girls are being presented. They went to the microphone and were asked what empowerment meant to them.

“I know that even if I do or I don’t win that I’m still unique,” fourth grader Success Wilkerson said.

Wilkerson won the Glowing Gryphon Pageant on the night of Feb. 22. Senior Kaitlyn Bowman hosted a pageant for the fourth and fifth grade girls from the St. George’s Memphis Campus as her Senior Independent Study.

The girls wore three different outfits and were able to participate in a pageant in front of an audience in the gym of the Memphis Campus. Almost all of the girls said they decided to take part in order to build their self confidence.

“I wanted to become someone that overcomes their fears,” fourth grader Kira Mayberry said.

Bowman has participated in many pageants, and she wanted to put on a pageant for students at the school who may also be interested in doing pageants.

“A couple years ago, when I was competing in a pageant, it was in a small town and a lot of the girls that were competing went to the same high school,” Bowman said. “They were talking about their school pageant, and they were asking about my school’s pageant. I said, ‘I go to a small private school, and we don’t have a pageant.’ So I decided to put on a pageant for my SIS.”

At first, she wanted this pageant to be for the senior girls at the Collierville Campus, but after talking to the Memphis Campus gym teacher and her mom, they presented the idea of having the pageant for the fourth and fifth grade girls. She thought this was a better idea.

Bowman wanted to focus on helping the girls build their self-esteem and also to connect with the girls from the Memphis Campus specifically, so they will not feel alone when they get to the Collierville Campus.

During the pageant, the girls were able to dance to their favorite song. They said “what makes them beautiful” and answered the question “what does empowerment mean to you?” Fourth grader Alma Morrison was the first girl to go on stage in all the events, but she felt more comfortable once she became closer to the other girls.

“I’m not as shy as I was when I met new people,” Morrison said. “I got to know people better.”

Senior NaCaria Guy, who helped assist Bowman during the pageant, says her favorite part of helping was being able to hang with the girls and watch them grow.

“They were so shy when they came in, and they were acting like they were scared of us,” Guy said. “By the third clinic, it was like we knew them for years or so.”

Although the girls only practiced the pageant for a month once a week, Bowman feels as though she saw a huge difference in their self esteem. She felt like the pageant accomplished what she wanted.

“One of the things that I wanted the girls to learn from this is that it’s important to have high self-esteem and have self-confidence and to be independent thinkers,” Bowman said, “because around that time, I feel like a lot of the girls might be swayed to do certain things by their friends. So it’s important for them to be independent thinkers and stand on their own beliefs.”

By becoming closer with their friends and themselves, the girls were able to see a difference in themselves. Bowman wanted the girls to feel special when they went on stage.