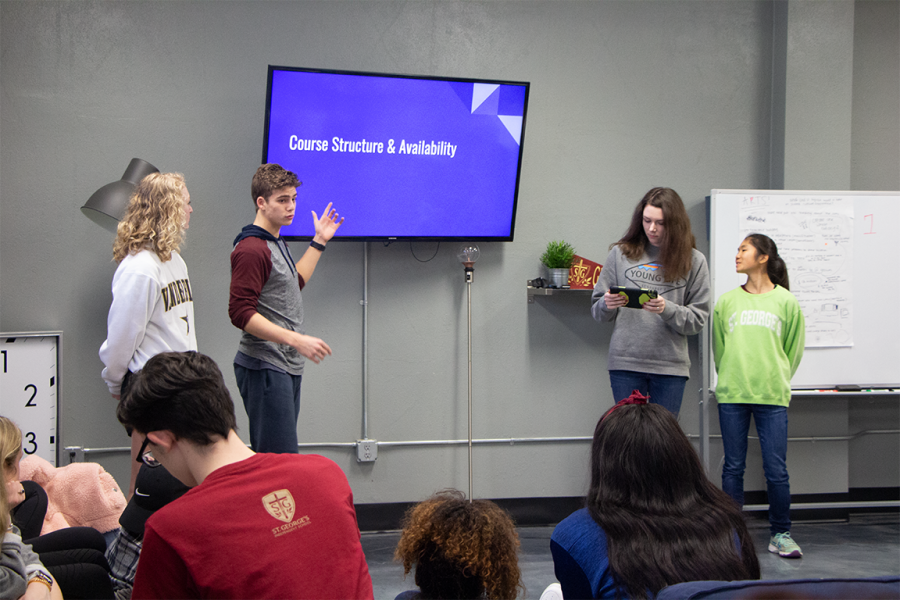 Juniors Anna Larizza, Silas Rhodes, Natalie Murrah and Sarah McDonald present their proposal to their classmates and heads of school. They hoped the restructuring of electives would make more available earlier in high school students’ careers.

“I really value that our school values their students,” junior Silas Rhodes said. “They care about the students opinions, and I feel like that’s not something that you see a lot in other schools.”

The junior class took their junior retreat last Thursday and Friday where they were able to participate in escape rooms and also visit and learn about Crosstown and the nonprofit organizations there. Mainly, the students were able to voice their opinions on what the school should change and solutions on how to change them.

Many groups presented their proposals to Associate Head of School Mr. Will Bladt, Head of School Mr. Ross Peters, Upper School Director Ms. Pam McCarthy and Athletic Director Mr. Tom Densford, hoping they would accept their ideas. There were groups concerned with such things as mental health, social awareness, academics and athletics.

“I’ve learned more about what it means to be a leader for the school,” junior David Ogle said, “and what I’m supposed to do as a senior.”

Many students describe how this retreat helped bring the school community closer together through activities such as Railgarden and the escape rooms. At Railgraden, the grade performed karaoke, with the whole grade encouraging people those singing.

“One of the best things was Railgarden, actually, where everyone was doing karaoke,” junior Natalie Murrah said, “and the thing is, all of us sounded probably pretty bad, but we all cheered each other on anyways. It made me kind of realize that even though we’re all very different people with very different interests, we can still be really supportive of one another.”

The junior trip began as a retreat to Victory Ranch, but it became too expensive for the school to afford. The bunk house was ready for use, and the class of 2017 was the first to go to the bunk house instead of Victory Ranch. The school felt it was able to accomplish what it needed without having to go out of town.

“The whole idea of the trip is why am I as an individual in this community? And how do I use my individuality to inspire an impact in the community?” Upper School Director of Student Life Mrs. Emmy McClain said. “Everyone always thinks that going somewhere is better, but sometimes there’s really cool things we can do if we stay closer.”

The students are still able to learn about themselves individually and how they can use their individuality to contribute to a larger.

“On the junior trips since before I was even on this campus,” Mrs. McClain said, “so a long time ago, it’s always had a component: the keep, change, legacy project we do where juniors kind of are given the opportunity to dream up what they would like to change about the school before they leave.”

Students have always thought about and reflected on what they wanted to change on the junior trip as a way to prepare students for being leaders of the school the next year. Students bond as a grade and try to come up with ideas for what they may want to propose for their Senior Independent Study.

“It’s a historical, traditional moment. One of the things we really value is student voices and we like the fact that so many things we do are born out of student ideas,” Mrs. McClain said. “That’s something we really pride ourselves in and we think it is what makes us continually evolving because students will continue to change and continue to have different needs and different ideas.”

Seniors who went on the junior trip last year say that the junior trip helped them move towards really thinking of ideas for their Senior Independent Study. Senior Jacob Riales said this trip helped push him towards his SIS, the art lounge, because it helped start the conversation.

“At the junior trip, one of the things we talked about as a group or the group I was in was how underrepresented the arts are in academics, and so we started thinking of ways to give people more opportunities to participate,” Riales said. “I sort of stuck with that and decided to have something similar to what our club used to do back in middle school, so every other week, it’s been on a Friday, I just have the space open for people to come work on stuff.”

Projects that came out of the junior retreat were the GryphNation app, the House System, the Upper School lounge and countless others. Many students were thankful for this trip because they were able to discover their passions.

“If it wasn’t for that trip, I wouldn’t have noticed my passion for art,” senior Alfred Johnson said, “and I’m glad I went on that trip because I learned a lot about myself and a lot about my interests.”

“I feel like I have a better understanding of our classmates on a base level,” Murrah said. “I used to think we were a little more sectioned off until they put us in the situation where we’re all in the bunkhouse together and a type of situation where we all interact and things like that. We all interacted really well and that was something I just wasn’t really expecting, and that was really cool.”