Where Do Christmas Trees Come From? 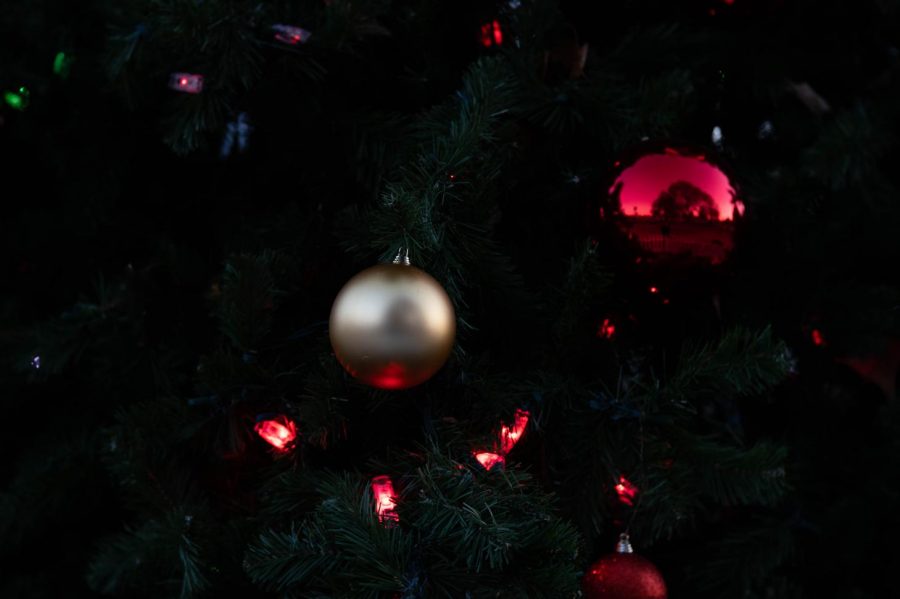 A christmas tree ornament hangs in the Collierville Square. Christmas trees have popped up all around Memphis as the holiday season descends.

Let’s say you’re a Christmas tree, or rather, a Christmas tree seedling. You’re going to want to be planted alongside some sister seedlings in a place where you can soak up the sun, roughly seven feet from your fellow tree friends. That’s about 350 million tree friends, by the way, planted all across the United States.

Depending on the kind of Christmas tree you are, you could end up in any of the fifty states. If you’re planted in the East, you’re most likely a Balsam fir, sporting a near-perfect, cone-shaped figure. If you’re in the Northwest, you’re probably a Douglas fir, requiring only minimal shaping to get that ideal cone figure. If you’re a Scotch pine, you can grow just about anywhere, but you’re nowhere close to resembling a cone before trimming.

As much as you want to be in someone’s home decorated with ornaments and low-heat LED lights, you have a long journey ahead of you. You still have eight to 14 years before you’ll be fully grown to the ideal height of seven feet, after which you’ll need to be harvested and finally bought by that nice family. You don’t even know about the business side of the $1.03 billion industry you’re a part of (you’re a tree, after all), but you’re about to learn.

While it’s easy to think of certain kinds of trees as seasonal, the business behind them actually requires year-round preparation. Mr. Charles Bartlow has been involved in the Christmas tree business for over 50 years and currently helps run a Christmas tree lot for Boy Scouts (BSA) Troop 50. The tree that your family buys in December was actually ordered back in the summer

“I start looking at prices on Christmas trees and quantities [in] April [or] May, and I have a formal order in place for the first of July,” Mr. Bartlow said.

While the official order is placed in July, Mr. Bartlow said he begins researching which trees are projected to be popular as early as January.

“It’s a seasonal business, but it’s around a year-long business on my side,” Mr. Bartlow said. “I also do research in January and February of new trends. What’s the best-selling tree this year? What it might be next year?”

Since Christmas trees take eight to 14 years to grow, it is important for farmers to do research in order to predict what trees will be popular. The ideal Christmas tree has evolved over time, making research that much more imperative to sellers’ success.

“Over the years it’s changed. Back when we started, it was Scotch pine. Then we’ve come into the Balsam firs,” Mr. Bartlow said. “Now we’re into Frasiers, and Nobles, and Crans, and Normans, and Douglas, very little Pine.”

Mr. Bartlow credits television to the changing preference of a Christmas tree. Television advertises a perfect cone-shaped Christmas tree, so that’s what people look for.

“That’s really in the eye of the beholder,” Mr. Lange said. “It’s a personal preference.”

As a live-goods merchant for The Home Depot, Mr. Lange is in charge of ordering Christmas trees for the nation-wide home-improvement company. Though Mr. Lange and Mr. Bartlow are both involved in the Christmas tree business, there are differences between how the two have to prepare for the selling season.

Being a local business, Mr. Bartlow’s lot sells fewer trees, around 425 each year. The Home Depot, on the other hand, sells a few more.

While The Home Depot has seasoned employees working in the department, Mr. Bartlow’s lot is run by a slightly younger generation. Daniel Larrabe is a member of BSA Troop 50 and helps work the lot chiefly run by Mr. Bartlow. Larrabe has helped the past couple of years now, having started when he was only 10 years old. Working on the lot has taught him the differences between the types of Christmas trees.

The Home Depot gets most of its Christmas trees from North Carolina and Virginia, but where stores get trees from really depends on where the store itself is located.

“In the Northeast, they also get their trees from North Carolina and Virginia, also a few farms in Vermont or Canada,” Mr. Lange said. “On the West Coast, the majority of the trees come from Oregon, Washington state or Canada.”

Mr. Bartlow got his trees from Oregon and Washington this year but has gotten them from Nova Scotia, North Carolina and Michigan in the past. Since he doesn’t have to worry about store locations, picking where to order the trees is much simpler for Mr. Bartlow.

“It’s wherever the supply is,” Mr. Bartlow said.

While Mr. Bartlow’s and Mr. Lange’s businesses are drastically different in size, they have more similarities than one might think. Both Mr. Bartlow and Mr. Lange view Christmas-tree shopping as a family tradition.

“I think it’s a fun business in terms of all the different types of business we do because it’s so family-centered,” Mr. Lange said. “I think both the growers take great pride in the fact that their trees end up in people’s homes to celebrate a holiday, and I think the stores really embrace the selling season.”

One of Mr. Bartlow’s favorite parts of the business were the relationships he developed over the years of being involved in the business

Mr. Lange shares Mr. Bartlow’s fondness of connecting to people, citing it as one of his favorite parts of the business as well.

“Most of the farms we deal with are family owned and multi-generational in the business,” Mr. Lange said. “In many cases, it was a grandfather or great-grandfather that started the business, and now there’s a third or even fourth generation working on the farm, so that’s an enjoyable part of the business is meeting the families,and understanding their capabilities, working with them to make the most out of the season in terms of opportunity for sales.”

While the farms are a crucial of the business, responsible for 98 percent of Christmas trees grown, they are also beneficial for the environment. For every tree harvested, one to three seedlings are planted, meaning more trees are planted than they are harvested.

“The farm is constantly in a state of growth,” Mr. Lange said, “and is only harvesting a small amount of their trees each year.”

Not only do farms contribute to a healthier environment, but the trees themselves are a renewable source. Unsold trees can be donated to wildlife programs that use the trees to create habitats for animals in normally barren places.

“Any trees that’s not used goes to the Tennessee Wildlife, and they use it for habitat: fish habitat, rabbit habitat, quail habitat,” Mr. Barlow said. “Basically, it’s recycled again.”