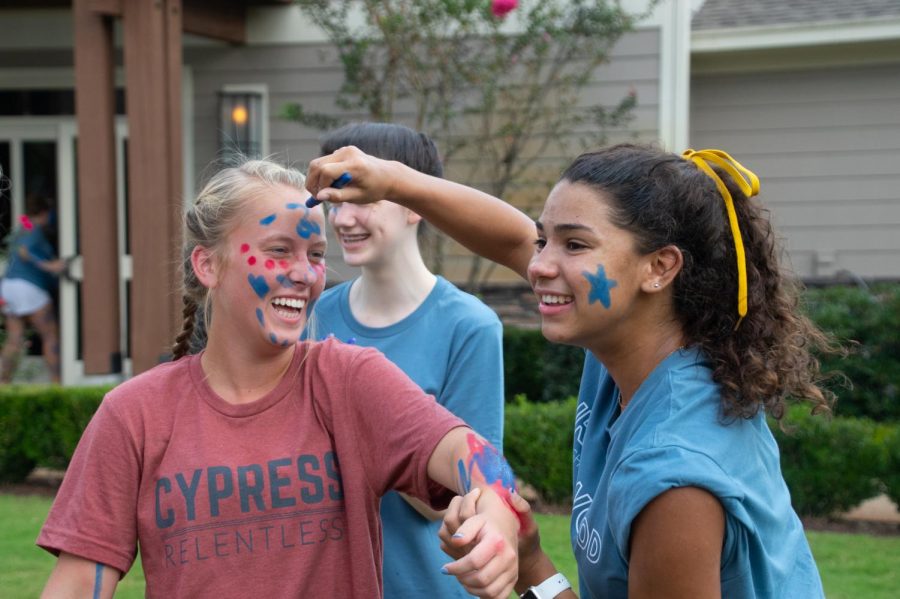 Senior Sara Washington paints Ironwood’s blue on Cypress member and freshman Morgan Schrum. Paint-up was just one of the many activities available on House Day.

It should have been an ordinary Friday morning, but an email the night before informing students of a shortened academic schedule suggested otherwise. From morning to noon, freshmen, sophomores and juniors confusingly rotated through their abbreviated classes wondering what awaited them at the end of the day, while seniors, in on the secret, innocently followed along.

Then the clock struck 12:25. The students were told to go to their respective advisories, but no sooner had they arrived, than groups of unexpected seniors entered.

“[The seniors] carried in a bag that looked like a food bag, so we thought we were getting a special lunch,” junior Anna Larizza said, “but then they pulled out t-shirts.”

“I thought it was a Harry Potter day,” he said.

As it turned out, Lewis wasn’t far off. St. George’s had rolled out a house system, similar to the one featured in the famous Harry Potter series.

The house system at St. George’s consists of four houses, but what makes it unique is that they are named after trees found at the Collierville Campus: Cypress, Ironwood, Honey Locust and Willow.

Each house has a motto, backstory, color, a mace reflective of its tree and consists of advisories
from each grade. The houses compete for pride and points, each one hoping to win the prize: being able to wear one’s house shirt on Fridays and skipping the lunchline.

Houses are awarded points for attending school events, showing school spirit during spirit week, being good citizens or doing well academically. The points are tracked through the GryphNation app, which was previously used to award students individually with prizes for their school spirit. Now, GryphNation is the framework behind the points system.

“As soon as we put on our shirts, we had this new pride for our house,” Larizza said. “It united everyone not only under a school but also a house.”

LAYING DOWN OUR ROOTS
While the house system was rolled out to students on Sept. 21, 2018, the idea was first brought to the school over a year ago.

“It was a group of students, the class of 2019, during their junior leadership retreat to the Bunkhouse, that started brainstorming ways to deepen connections across grade levels, enhance student culture,” Mrs. McClain, the upper school director of student life, said. “They built off of an idea that other schools have used across the country, of creating a house system that is relevant to our community.”

Mrs. McClain was deeply involved in the creation and implementation of the house system at St. George’s, and while she credits a group of students for the idea, she cites seniors Evan Dorian* and Surabhi Singh as two students who really pushed the idea through.

“Evan and Surabhi, they led a student group who actually had a lot of kids in and out contributing different parts of it,” Mrs. McClain said. “They were really big in the launch.”

overarching and unifying force to bring the school together.

“[Surabhi and I] were thinking about ways we could make a real difference in the school by doing something overarching, rather than just a pep rally or a dance,” Dorian said.

With Mrs. McClain’s support, Dorian and Singh took the idea and ran with it.

“At the junior retreat, we got together a bigger group of people,” Singh said, “and just took in dif-
ferent ideas they had about it, [for] events [and] possible structure.”

Though Dorian and Singh were the driving force of students for the house system, they don’t want it to be identified as just their project.

“Even now, they don’t want to necessarily be too closely tied to it,” Mrs. McClain said, “because they want it to be something that is everybody’s. It’s not something that belongs to one person.”

Director of Counseling and Guidance Mrs. Elizabeth Bran was also a key contributor to the house system, helping find a way to divide the students into the four houses.

“Mrs. Bran, she’s the one that did all of the advisory work, getting everybody put into the right place,” Mrs. McClain said. “We had to establish a structure that would work within our current advisory system that we already have.”

Finding a way to use the current advisory system was just one of the many things that made the house system unique to St. George’s.

“The incorporation of advisories into the house system is something we do,” Singh said. “It’s already building off of our advisory system, which is pretty special.”

Advisories aren’t the only part of the St. George’s house system that makes it special. The names for each house were inspired by trees found on the hundreds of acres of land at the Collierville campus.

“Mr. McClain, being very connected to the outdoors here, I believe he just made a master list of all the trees on campus and emphasized the ones that were unique to campus, or at least for the most part, unique to St. George’s,” Dorian said.

Before settling on the native trees, mottos from a portrait of a St. George’s graduate and combined roots of words were also on the short list for house names.

Ultimately, Cypress, Ironwood, Honey Locust and Willow made the cut.

To explain the story behind the names, longtime members of the St. George’s community were selected to be “storytellers” for each individual house. The storytellers told of the origin and nature of each tree, describing how each house reflected its tree’s characteristics. The story was only shared within the group, creating a sense of community.

“What we tried to do with the storytellers was bring in people that could tell a good story so that by the end of the day, the people wouldn’t want to be anything else,” Mrs. McClain said. “We didn’t want to make the story so elaborate that nobody would get it. We just wanted to highlight this is what this tree is. This is why it’s so cool. This is why trees are cool anyway, and you should love your tree for what it is.”

BRANCHING OUT
Mrs. McClain hopes that the house system will mirror the trees it was named after, continuing to grow even after the founding seniors leave the campus.

“We found trees that grow, that are indigenous to our campus, with the help of Bill McClain, that grow strong and are resilient, tough,” Mrs. McClain said, “and these magnificent trees that keep going and will be here long after we’re gone. That’s why those were chosen.”

Singh echoed Mrs. McClain’s sentiment, hoping that the house system continues when she and Dorian are gone.

“I’m just looking forward to seeing where it goes because Evan and I will be gone after this year,” Singh said, “but just hopefully it continues to be a part of the school and [we get to see] where other people take it.”

While the school has high hopes for this house system, the founders acknowledge that problems may arise. One potential problem is the competition for points overshadowing the friendly community it was intended to form, instead creating divisions within the school.

“I think that problem, if it presents itself, is likely to work itself out,” Dorian said. “Being competitive is definitely something we want people to strive for in this house system because it causes a lot of house pride, [but] I think ultimately people will see the bigger picture that it is just meant to be a uniting force more than a competition.”

The day of the house system reveal suggests Dorian was correct, with students responding to the opening event with playful rivalry instead of divisive competition. Larizza testifies to seeing positive interactions between new house rivals.

“People were painting everyone’s faces, glitter, hairdos, you name it. There was all sorts of col- ors going on,” Larizza said. “You had people running around from room to room finding out if their friends were in the same house and if they weren’t, they were teasing their friends that they were going to beat them that day. It kind of united everyone to show up and show out for the school.”

With such a positive response to this first day, students are looking forward to what else will come from their new house system. Mrs. McClain and Dorian believe that the element of surprise surrounding house events is key to its success, so both were tight-lipped about what students could expect.

When asked if he had more details, Dorian answered rhetorically.

But they did confess that there will be three more major house events, with one specifically hav-
ing to do with the arts.

“We have one that’s going to be geared towards the arts, that’s going to culminate near the Coffee House,” Mrs. McClain said, referring to the annual tradition which takes place before Thanksgiving
break. “It’s a really fun one and you’re going to like it.”

No matter what the future brings, the school is hopeful that the house system will reap what
it sows.

“Our goal was to be pretty much as inclusive to student interest as possible and to make sure that no one feels like they’re alone and to encourage interaction between people in the same grade and people spanning the grade,” Singh said. “As long as we stay true to our purpose and accomplish those things, I feel like we did our job.”